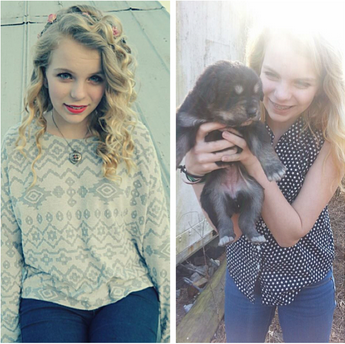 Wild and carefree 13-year-old Haleigh Ward manages to turn heads wherever she goes through her unique way of life, beautifully written stories, and the positive attitude she holds in every situation.

While many high school students could not imagine living a week amongst a diverse population of pigs, sheep, a goat, a cow, chickens, ducks, and geese, Ward has been surrounded by these animals on her family-owned farm in Franklin, Virginia ever since she began walking.

“I’ve been there through all the stages of [the animals’] lives and it’s reassuring to know that our family is giving them the best life that they could have,” she told J Student Reporters, affectionately remembering her several dozen animals by name.

“[Living on the farm has] also helped me to appreciate my family,” she continued, “because we’re always working together to solve mini farm crises.”

Between hauling heavy troughs to feed her pigs and bringing animals in to sleep at the end of the day, Ward focuses on her education. After being homeschooled for close to seven years by her mother, Ward entered public school during the middle of 7th grade, skipped two grades, then transferred to a writing school an hour away from her home by bus.

“I really liked being homeschooled because my education was tailored toward what I needed to know, and being near the farm allowed me to help around with the animals,” Ward recalled during the interview.

Ward explained, “when I went into public school I wasn’t accepted right away and I didn’t understand how things worked in the system. It was absolute shell shock.”

Still, Ward said in the interview, “I’m so lucky for the type of life I’ve led. I’ve had strange misadventures that many people would never get the chance to experience, and I’m so grateful for that.”

Another significant part of Ward’s world is writing. From her descriptive narratives to her ethereal poems, many of her own experiences are brought to life through her written works.

“I’ve always written. I remember my mother always made my sister and I keep journals where we could write about anything,” Ward told JSR.

The fall of her freshman year, Ward transferred from her public middle school to a Governor’s school, specialized for writing. “Now,” she stated, “those silly stories launch me to a place where I can receive real instruction on my writing.”

This past summer, Ward attended the Young Writer’s Workshop at the University of Virginia, a three-week program in which participants continuously practice writing in a specific genre. In the Creative Nonfiction genre of the workshop, Ward wrote several narratives including a memoir called “White Winter Existential,” which outlines the dark thoughts of a teenager during one bleak winter storm.

According to Zoe Panas, a fellow young writer and Ward’s roommate at the camp, “Haleigh’s writing is unique because she is able to use unusual words and images to convey a beautiful idea.”

Meanwhile, in her free time, Ward can be found hanging out with her sister and chatting with friends, sporting her favorite contemporary slang term, “Hella,” which she claims takes on a variety of different meanings to fit in any situation.

Through the numerous unconventional aspects and changes in her life, Ward has learned many valuable lessons on the fleeting nature of life.

When asked for advice she could give to future students, writers, and dreamers, Ward said, “Be thankful for your experiences and family and friends. Take every chance, have no regrets, and make memories, because if you don’t seize the day, life will pass you by.”