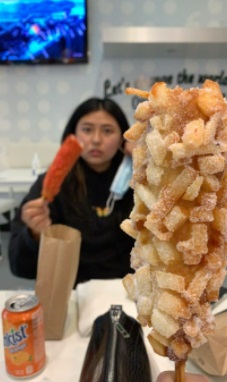 Korean corn dogs are a popular Korean street food that consists of deep-fried hotdogs with mozzarella. There are numerous topping options, including potato, rice puffs, and even more unusual options, like chocolate or hot cheetos. After they are fried, they are coated in a layer of sugar and eaten with sauces such as ketchup or ranch.

Tik tok was the place where Korean corn dogs first became popular. I’d always see videos of people trying this food,Korean corn dogs and that made me want to try them even more. On Tik Tok, there are many food trends, and this one reminded me of the dalgona whipped coffee fad, which is also a Korean food.

I didn’t understand the craze, or why people thought they were so wonderful. I had tried Korean corn dogs before, but they were the pre-packaged ones sold in Korean markets that didn‘t have any toppings or a sugar coating, so they were pretty bland. Even my friend would go on and on about how she loved Korean corn dogs and wanted to go eat them. Finally, I decided to see what all the fuss was about, and went to a korean corn dog shop in downtown Los Angeles with my friend. The prices were very reasonable, with the regular corn dogs costing around $3 and the ones with toppings costing around $5. Because it was the most popular, I ordered the potato corn dog with half sausage and half mozzarella and my friend ordered a hot cheetos corn dog.
Because of the sugar, the outer layer was crunchy and sweet, but it also had just enough salty to balance out. The melted cheese complemented the sausage perfectly. I could now see why it was so popular;. iIt was incredibly delicious. My friend said that her corn dog was also really tasty, and that the hot cheetos toppings added more crunch and spice to the corn dog. I highly recommend everyone to try out this amazing Korean street food.