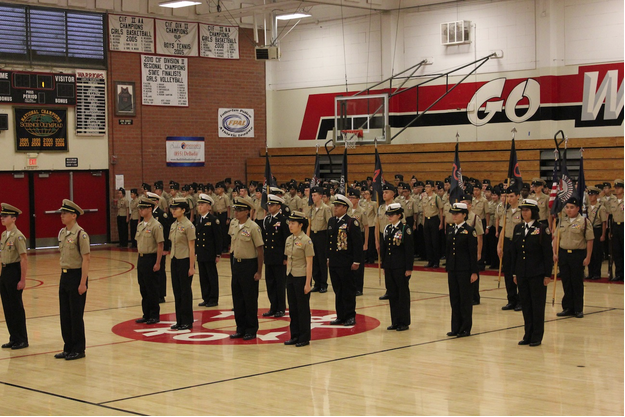 On Saturday, March 1, teams from the Troy High School Naval Junior Reserve Officer Training Corps (NJROTC) will be going to the California Super Bowl to compete with other ROTC units for the State Championship and a spot in the National Championships in Florida.

With over 400 students, Troy’s NJROTC is the largest unit west of the Mississippi. The program is almost entirely student-run and attracts a diverse group of students. Although it is classified as a Physical Education class, it involves much more. According to the NJROTC website, its mission “is to instill… the values of citizenship, service to the United States, personal responsibility and a sense of accomplishment.”

Troy has a reputation for being strong in Armed Exhibition, an event in which cadets spin 10.5 pound M1 Garand rifles in a cohesive marching formation, and Unarmed Regulation, where cadets compete by marching in unison with precise steps and arm movements.

“We have been preparing very hard for this competition. We practice multiple times a week and have even hired a couple of professional drill coaches to aide us in our goal of qualifying for the national competition,” replied Team 2’s Armed Exhibition commander Daniel Chung in response to a J Student Report question regarding their preparation for this event.

The Troy Marksmanship team, however, did not make it to Nationals this year.

“Although we are upset about not making it to nationals, we’ve already begun preparing for next year,” said Varsity Assistant Commander Josh Park in an interview with JSR.

“This upcoming July most of the varsity shooters will be participating in a marksmanship clinic to better prepare ourselves for the next state competition,” he continued. “We all have our own personal goals, but our main goal is to try to improve as a team.”

The program, however, is not only about competition. The program offers thousands of unit service and community service hours every year, and Troy’s NJROTC cadets perform the Color Guard ceremony for every Troy sports event and act as ticket sellers and security officers at football games.

Unfortunately, Daniel never submitted his byline. That's why this puppy is so so sad.