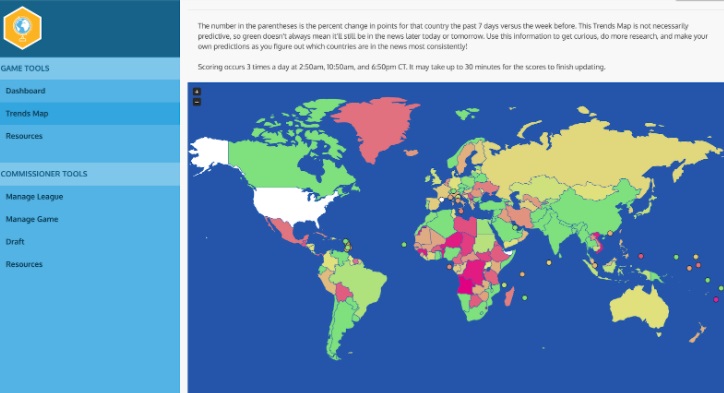 Online learning has provided students the opportunity to be well educated, even amidst a global pandemic. However, despite the benefits of this new form of schooling, virtual classrooms are often considered to be less engaging and productive than normal in-person learning. Therefore, it has been key for school educators and administrators to find methods that keep students as engaged as possible in order to replicate a typical classroom environment.

One technique that Culver City High School’s Global Issues teacher has implemented to create a more interactive class is FANschool, an educational site that features fantasy sports-like games featuring current events, such as elections and world news, rather than sports. As people continue to be more and more disconnected from local and global news events, FANschool games have become a popular method for teachers to interest students in these topics. By using a similar format to the widely popular fantasy sports, the games create a competitive atmosphere where students engage with global affairs.

FANschool was started when Eric Nelson, a former high school civics and history teacher, created the site’s first game in Fantasy Geopolitics. In this game, students draft multiple countries that score points based on how often they appear in the news and its Goldstein Tone, a conflict-cooperation scale that attributes values to certain types of international events depending on its tone. A global affair with a positive global news tone, such as negotiations or trades, scores points. A country involved in an event with a negative global news tone will have points deducted; these affairs include conflicts such as protests or military attacks. Similar to fantasy sports, in Fantasy Geopolitics, students can draft and trade for countries that they believe will score the most points.

While top countries, such as China and France, are obvious picks to score many points, there are “sleeper picks,” or lesser known countries that have the potential to appear even more frequently in the news and achieve a positive global news tone. The competitive nature of the game encourages increased participation and interests students in following the news on a daily basis, hopefully doing so as passionately as they might watch sports.

By playing “fantasy geopolitics” in my Global Issues class, I have found the mission of FANschool to hold true. With the competitiveness among classmates to score the most points before the “season” ends, I have seen more of us becoming engaged with world news, even if only to see which countries are trending the most.

Although helping students learn about current events is the main aspect of FANschool’s games, the engagement facet has been more important than ever in an online learning format. With the games on this site providing an opportunity to learn about current events in an entertaining way while increasing participation in the process, FANschool is definitely a unique yet valuable learning tool for teachers and students.