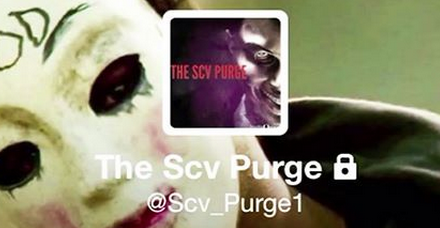 Starting on July 16th, a Twitter trend known as the “SCV Purge” exposed explicit pictures of Santa Clarita Valley teenagers to the world, causing shock in the community and leading to a police investigation.

The incident occurred in the days before the July 18 premiere of “The Purge: Anarchy,” a movie about the consequences of one day of unpunished crime in a city. According to Kymmi Cee-Live of watchloud.com, “It began late Wednesday when the Twitter handle @Scv_Purge began releasing full nude body shots of local teenagers, later threatening to release the names.”

Twitter suspended the account, but its creators continued under similar Twitter handles until the account @Scv_Purge1 gained more than 3,000 followers within hours after its creation. Personal information and nearly two dozen inappropriate images regarding teens’ sexual behaviors were submitted by other teenagers without consent. The account also revealed the names of the teens who had exposed their peers.

“I honestly don’t know what’s more shocking: the fact that my nudes were exposed to everyone, or that my friend was the one who submitted them,” said a student victim, who prefers to stay anonymous, in an interview with JSR.

The victim continued, “You just don’t know who to trust anymore.”

The SCV Purge has created a controversy among the community since students exposed other students, harming relationships and friendships. While some may be able to forget, those exposed will have to deal with lasting consequences such as struggles with forming new relationships and conflicts with families and friends.

People have also complained about the social issues related to the incident, including sexism, as the majority of the exposures were aimed at females. The purge has been debated even among those not directly involved.

“I think that the exposure is definitely the wake-up call that this town needs,” stated Hyeji Suh, a sophomore at Valencia High School, when contacted by JSR. “Nobody actually thought that nudes were going to be leaked. Lots of people blame the people who sent nudes, and lots of others blame the people who submitted others’ nudes to the owner of the site. It definitely teaches us that the consequences [of irresponsible social media use] are in fact inevitable.”

The Santa Clarita Sheriff’s Department has been investigating the case to find the source of the accounts. According to California law, exposing explicit images of underage teens is considered child pornography and is punishable by up to eight years in prison and lifetime inclusion on California’s registry of sex offenders.

Whether they are caught and prosecuted or not, the perpetrators of the SCV Purge have given a reminder to the community of the dangers of sexting and the value of trust.