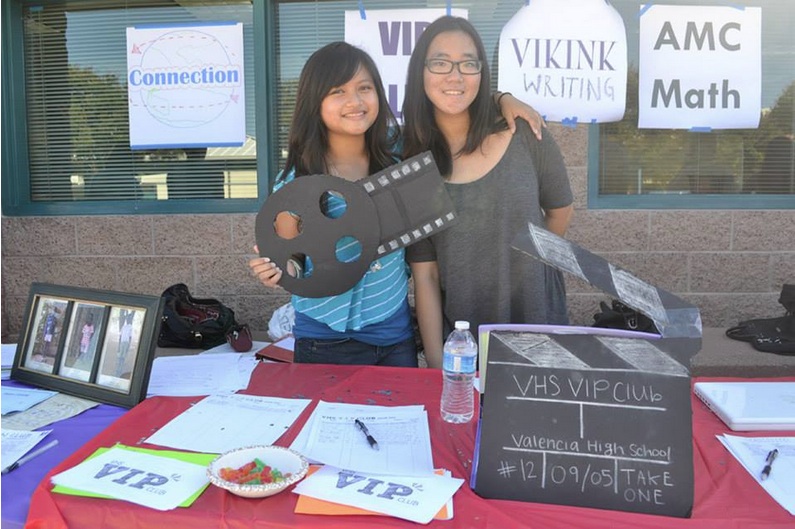 On Thursday, Sept. 5, Valencia High students of all grades had the chance to sign up for various student-run clubs as they toured booths set up around campus.

At a school with such a big population, it can be difficult to find people who share your interests. For that reason, schools have allowed students to found and join clubs. Some clubs exist to talk about a common interest, such as the Japanese Pop Club or the Literature Club. Others advocate causes, such as Key Club for community service and SAVES Club, which is dedicated to saving endangered species.

Every year during the first week of September, Valencia High school dedicates the first few hours of a day to Club Day. On Club Day, students tour a maze of booths advertising the clubs. While it is a fun experience for observing students, club presidents take it very seriously.

“The majority of students come out during brunch, which is only about fifteen minutes long,” says Joyce Lee, s junior and the president of the writing club Vikink. “That’s fifteen minutes to demonstrate to a crowd of thousands what your club is about. You have to make it count.”

With more than twenty booths, students spend less than a minute at each. However, this time constraint has made them resourceful. Some of the more common methods for attracting attention have been to bring candy and play music during the event.

“I give out fun-sized packs of Skittles with stickers advertising our club on them,” says senior Amber Yoo, president of Connection. “People come for the candy, but they leave with information about our club. It’s a win-win situation!”

“I like to bring a ukulele and play… It’s fun and unique, so it attracts a lot of attention,” says senior Eugene Kim, vice-president of Pathfinders Christian Club.

Despite the pressure of recruiting students, Club Day is entertaining experience for both club presidents and potential members alike.

“I love touring the booths every year… to see what kind of interests we have on campus,” says junior Christina Lee.