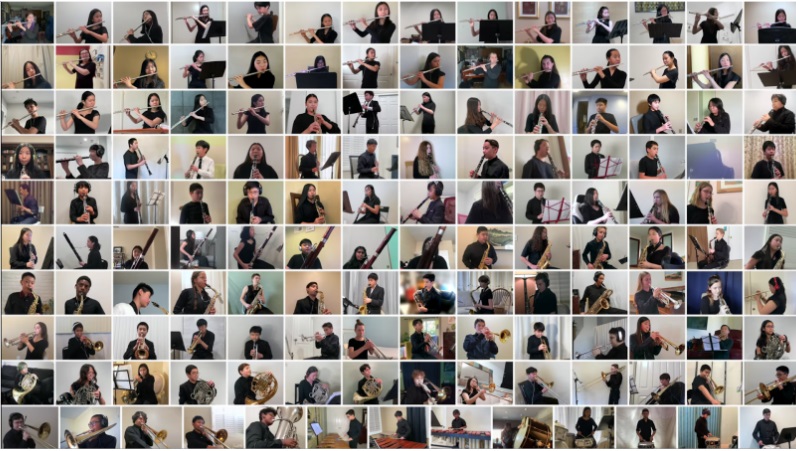 Coronavirus has stopped so many gatherings and concerts for music students around the whole world. However, as many people are getting the vaccine, schools have started to have outdoor orchestra practices.

Just a few weeks ago, Southern California School Band and Orchestra Association, SCSBOA, posted its annual concert on Youtube, showcasing the students who were chosen this year. This organization gathers students of all ages to create the best performance from the Southern California area. This year, though the members were not able to meet in person, they were able to send in videos of them playing the piece. During the live stream, elementary and middle school students were showcased with 1-2 pieces each.

Before the scholars were able to record for the final performance, they had to go through another process; being chosen. Since there are so many young musicians in the Southern California area, they were required to show off their skills on their instruments. Those wanting to join the orchestra were prompted to play one band or orchestra piece and send it into the association. For students who wanted to go a step further, they played a solo piece that was chosen. From there, the association chose those that fit the expectations the best.

Once the students were chosen, they received a confirmation email with a list of everyone who made it. Soon enough, they were sent an envelope with the sheet music with their parts on it. The association also held a few Zoom meetings so that students with questions about the piece were able to ask freely. The instructors went over the pieces and explained how to properly take a video for the final product. Finally, the performers recorded their videos in the correct attire.

One of the fathers of a 7th grade musician stated, “I’ve watched other online concerts but this one was a lot better than I expected visual-wise, sound-wise, and overall. Also, I could focus more on listening to the music and the feeling of it compared to the live concert that was held last year. Lastly, because it was an online concert, I was able to send it to my family that lived in another state and even another country, so that was an extra plus to the online concert.”

Though it is still a bit early for in-person concerts, many organizations and schools are trying to make the best out of the current situation. Like SCSBOA, there are better ways to satisfy the musicians and the audience even if it is online.