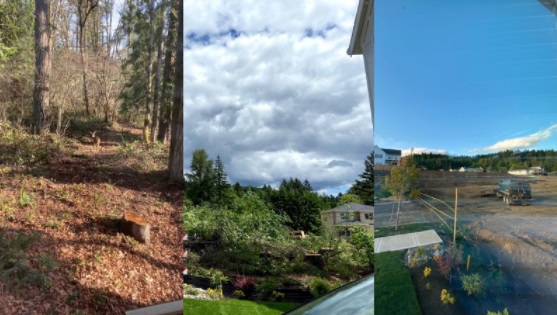 These days, more and more people are paying attention to environmental issues, such as climate change. One of the issues that is always around us is deforestation. Nowadays, deforestation is happening due to logging, natural disasters, urbanization, mining, farming, and agriculture. According to the World Bank, 1.3 million square kilometers (larger than South Africa) of forest was lost from 1990 to 2016. Recently, I experienced the issue of deforestation directly, and faced the need to pay more attention to this issue. I moved to a new neighborhood, and even now, people are building many new homes. At first, I only complained about the noises they were making, but as time passed, I was able to see the negative effects of cutting down trees to build these houses. In a short term effect, the air condition became worse, because while cutting down trees and grinding them, dust covered the whole atmosphere as if there was a wildfire nearby. Moreover, trees are important to us because they absorb carbon dioxide, which can be harmful to the environment. This is the main factor of global warming, so deforestation definitely increases the temperature of the Earth’s atmosphere.

Even though these effects are terrifying, everything is a result of people‘s choices. However, other ome groups suffer from our actions: animals and plants. The reason that my interest in deforestation grew began when I saw deer at the construction site. When I moved to this neighborhood, I would see a group of deer very often, because there was a small forest right next to my house. However, once people started to cut down trees, I could not find deer anymore. Surprisingly, one day, when I was walking my dogs, I found two deer. What was happening was that wild animals were losing their homes and risking their lives for their survival . Similar to this, since 80% of animals’ and plants’ habitat is the forest, deforestation is threatening so many innocent lives.

So, what can we do to stop this situation? One well-known movement is planting trees to repair what we have done. According to National Geographic, “residents of Kokota have planted more than 2 million trees on their small island.” In addition to this, we can pay closer attention to what we consume;buying sustainably produced products will help to prevent deforestation.

I hope this can remind people about the importance of paying attention to what is happening to our world and work hard to prevent later tragedy.