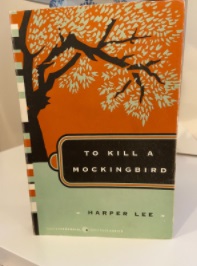 Last year, after reading Harper Lee’s To Kill A Mockingbird, my teacher sent our class a survey regarding whether, as students, we thought the book should remain part of the 8th grade curriculum. This survey was vague because it did not explain why the English Department was considering axing the book. How was I supposed to respond? I found no substantial reason not to read the book, and more importantly, the book was meaningful and left an indelible impression on me because of the admirable characteristics and self-sacrifice demonstrated by Atticus, the book’s main character.

I emailed my English teacher asking about the reasons for the survey. She replied the next day, explaining that: some students think Harper Lee depicts the white race as more dominant than the African-American race. She went on to say that students interpret Atticus Finch to be a “white savior” who rescues Tom Robinson, the accused “helpless” black man. The image of the “white savior” is upsetting to certain students, she contended.

This notion of the “white savior” comes from the phrase “white savior complex,” which, by Wikipedia’s describes it as “refers to a white person who provides help to non-white people in a self-serving manner.” This definition gave me a general sense of what is at stake with the English Department’s concern about the To Kill a Mockingbird. But was Atticus self-serving or was he self-sacrificing? Student opinions varied.

One student claimed that Atticus had no intention to be self-serving: “He [Atticus] risked his job, his personal wellbeing, his children’s wellbeing, his financial stability, and the respect he had established in his community, by defending Tom Robinson, which in my opinion is not self-serving but courageous.” Some students agreed while others did not. One particular student who thought Atticus was depicted as a “white savior” claimed, “If it‘s not plain enough, the plot of the story is about a rich, educated, white man, who uses his overwhelming power to provide Tom, a black uneducated and helpless man, with some of his ‘gracious mercy.’ This is precisely what the definition of a “white savior” is, which is unhealthy in our pursuits as a country to move past racial stereotypes. We shouldn’t be reading books like these from childhood because they will lead to opinions and perspectives that are stereotypical. It is a well written book… but the depiction of black people as helpless is upsetting.”

The controversy surrounding this classic book is recent, at least in our school. Although I do not completely agree with those claiming Atticus is a white savior, I do wonder why he is seen in such a light. Why is he subject to criticism for helping a black man? And how can we possibly distinguish self-serving actions vs altruism in the context of a book?