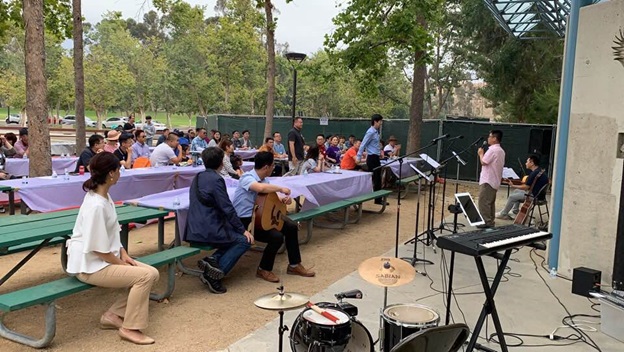 On July 6th, at Ralph B. Clark Park, there was a Christian meeting for about one hundred Korean Chinese American (KCA) people from 10am to 5pm.These people were born in China, with Korean ethnicity, and live in America. This means that they are not very good at speaking one language and are not completely familiar or comfortable with living in America.

At the beginning of this meeting, everyone gathered and greeted each other while setting up for the meeting. Then, they shared a time of worship, where they all sang, while some of the volunteers were cooking in the back. While they ate lunch, they sat with each other to talk and get to know each other. Lastly, the people that gathered at the meeting finished with recognition of people that helped this meeting happen and information that can be useful to everyone.

I also interviewed Jean Kim, who was invited to speak to people in this meeting. She spoke to the people about communication between first generation and second generation KCA people. She also talked about identity issues that many KCA people had since they were not completely Korean, Chinese, or American. Her family is Korean American, but even as a Korean American it is hard for her and her kids to know their identity, if they were more Korean or American. She mentioned that it would obviously be harder if they were KCA, meaning they did not belong to any of the three completely.

Kim talked about three types of these people: high American low Korean, who were comfortable in America, but felt more isolated in Korea; high Korean low American, who felt comfortable in Korea but not really in America; low Korean and low American, who doesn’t feel isolated from both societies and lastly high American high Korean are permeable, and can go to Korean societies and still understand and fit in relatively well, and can also adjust to the societies in America. In general, these people had issues with language, culture, etc.

To help these people, Kim suggested for open communication and for them to not judge each other. She told them that sharing what they are struggling with to others and giving their knowledge about areas that others are struggling in would benefit both sides. Kim also guided the parents so that they would have an open mindset about talking to their kids to see what their opinions would be, and that they would not be parents who force their children to do everything that they might not want, possibly. Communicating with their parents might help the kids find their identity better and feel better about staying in either the American or Korean culture.

In the end, the KCA People’s Meeting was a grand success and many left feeling better and hopeful for the future.