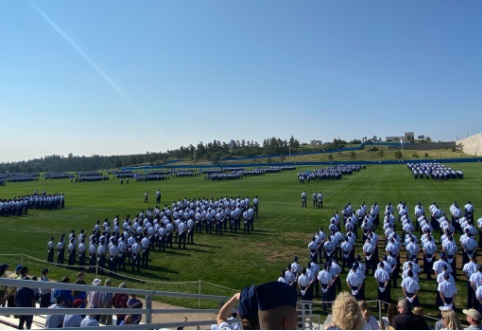 As one of the five military academies of the nation, the United States Air Force Academy, is a highly prestigious source of world-class education and military training. Students who aim to enter USAFA must be of high academic achievement and have great physical stamina. This year’s appointees of the class of 2025 first underwent their Inprocessing Day, was the day they entered the Academy with a single bag of their belongings and rushed in lines to various stations at the screaming orders of upperclassmen. Following I-Day, basic cadets pushed through six weeks of training, at the end of which they attended their Acceptance Day.

Acceptance Day, also known as A-Day, consisted of a parade where basic cadets and the Cadet Wing, which consists of all cadets, stood at the Stillman Parade Field in an inverted-wedge formation and marched. This specific formation would only be used twice in parades – when new cadets are accepted in the Wing, and at the graduation parade when a graduating class leaves the Wing. After taking the Honor Oath, the newly minted C4C cadets, or class four cadets, were accepted into the Cadet Wing. The closing statement made after the oath was followed by the class of 2025 roaring their motto: “Never quit, never settle.”

Following a short recess, friends and families that had been spectating from the bleachers were allowed to meet their cadets at the field. A sea of blue clothing rushed from the stretching length of bleachers as cadets and their families met in person for the first time in over a month, on the turf of the parade field. Within ten minutes, each of the 40 squadrons began their own shoulder board ceremonies. Each squadron split up into two separate rows facing each other. Each cadet was called down one at a time to walk along the path with their fellow cadets on either side of them. As each individual walked down the aisle, two upperclassmen stood at the end and attached fourth-class shoulder boards on the cadet. Enlivened applause rang for each cadet’s name that was called. Every cadet held jubilant smiles on their faces during this monumental moment of their lives. Parents, families, and cadets alike all stood with pride; not only for their own child, but for others and the great achievement that this day signified.