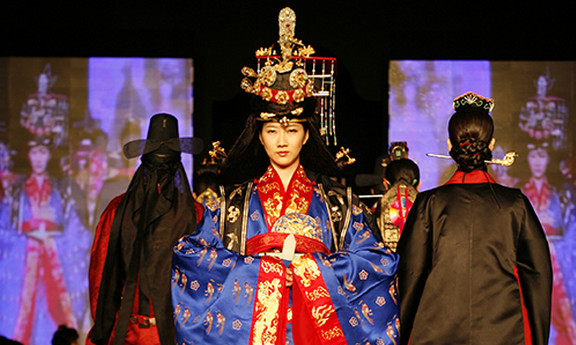 With the passing of the years, America has only become more diversified. New immigrants with the goal of survival often bury themselves into microcosmic niches of their own cultures, unable to fully tear themselves away from the lands they’ve left behind. Howev

r, their descendants take a different mission: to not merely assimilate into American culture but to spread their own heritage and engage in an exchange of culture.

Today’s generation of Korean Americans has taken on this goal, employing a variety of methods to bring awareness of Korean culture to the United States.

The Korean Cultural Center of Los Angeles (KCCLA), funded by the government of Korea and located in the mid-Wilshire district, is renowned for its extensive efforts in propagating traditional Korean culture. KCCLA is operated by the Korean government’s Ministry of Culture, Sports, and Tourism and is one of the many similar centers around the world. The cultural centers were created to make Korea’s history and heritage accessible to the public.

KCCLA’s mission is to introduce and promote Korean culture through museums, exhibits, dance performances, music performances, field trips, and more. First opened in April of 1980, the Center has an exhibition hall on the first floor showcasing historical and contemporary Korean artifacts such as embroidery and pottery. The KCCLA also has an art gallery on the second floor that is used to hold exhibits every month.

“We have over 70,000 visitors a year,” stated public relations manager Rick Phillips to JSR, “and around 10,000 visitors from field trips.”

When asked about how KCCLA influences the community, Phillips said, “We are having a growing number of non-Koreans–up to about 40%–joining the Korean Language class we offer. KCCLA also holds seminars for teachers from around the world so schools can incorporate Korean culture in their lessons. The KCCLA will continue to promote the Korean culture. Just as Korea changes and evolves, we evolve with it.”

In March 2013, The Getty Museum collaborated with the Korean Cultural Center to produce a show called Hanbok: Mesmerizing Beauty to present the rich history of the hanbok, a traditional Korean garment. Featuring hundreds of costumes made by renowned designer Hyun-Sook Lee, the event gathered crowds of diverse demographics and garnered appreciation for one of Korea’s oldest traditions.

“It was a really prideful moment for me because it allowed me to represent Korean tradition through modeling,” said Christina Chung, a student who participated in the show, in a conversation with JSR. “There was a big audience, and there were actually more Americans than Koreans.”

The show highlighted the development of hanboks throughout history, from the Three Kingdoms Period around 57 BCE to the present century. The featured replicas demonstrated how the garments were worn in the past and were made with stunning detail.

While these organizations are working to promote and preserve Korean traditions, other aspects of Korean culture are being commercialized for mainstream audiences. JSR interviewed various organizations who are actively working toward the spread of Korean American media, cuisine, and fashion throughout the nation.

In the media, minority representation is rare. Many movies feature heroines of Caucasian descent, with a smattering of racial diversity to placate viewers. However, the Center for Asian American Media (CAAM), a non-profit organization dedicated to sharing the diversity of Asian American culture, is working to change this through an annual event called CAAMFest.

“CAAMFest is the largest and most prestigious festival dedicated to Asian and Asian American media,” said Masashi Niwano in an interview with JSR. “It is also an opportunity to get the selected films a good amount of local and national press, which not only helps the films and filmmakers, but also brings recognition of these programs to the larger culture.”

With a demographic split almost evenly between Asian Americans and other cultures, CAAMFest draws in broad audiences and shows them films selected for their authenticity and memorability.

“On the programming side, we do think about ‘Asian American’ culture and what topics we should showcase at festival. In the end, our program has many layers which will hopefully connect to as many people as possible,” said Niwano to JSR.

The goal of both CAAM and CAAMFest is to not only work towards media recognition of Asian Americans but to combat negative stereotypes perpetuated by existing works. With over 26,000 attendees annually, their success is evident.

Another aspect of the Korean-American culture that is joining the mainstream is that of Korean cuisine: more specifically, Korean barbeque. Once a traditional meal, Korean barbeque, also called KBBQ, has become ubiquitous in everyday cuisine.

KBBQ restaurants provide tables with a grill in the center that allows customers to cook their own meat. The closeness of the seating also creates a comfortable atmosphere that results in both a novel and social experience. Many KBBQ customers are of diverse racial backgrounds.

“I go out for KBBQ with my friends all the time, none of whom are Korean,” says Ian Hurst, a Valenica High School junior and KBBQ enthusiast. “It was confusing at first because the menu items were all foreign to us, but after a few trial-and-error moments, we ended up having a great time. My favorite meat is the chadol; it cooks the fastest!”

A few non-Asian individuals enjoying a Korean dish may not be the representation people for which people are fighting so hard. However, the fact that non-Koreans are recognizing and adopting aspects of Korean culture is a big sign that significant change is taking place.

“Because I’ve lived most of my life in America, I had adopted the American culture to fit in with my peers. I brought a sack lunch every day with meals similar to what my friends brought, I wore trending fashion, partook in hobbies that everyone else seemed to do,” explained Linda Lee, a Valencia freshman, in an interview with JSR.

“However,” she continued, “when I was at home, I became Korean. I ate Korean meals, spoke Korean, watched Korean shows. It was as if I was living a double life. So when my non-Asian friends started talking to me about the Korean dishes they had tried the other day, it felt a little odd.”

“After I got over the initial weirdness,” she said, “I realized that they were appreciating a part of my culture, and that felt so refreshing — like my separate lives had become joined.”

The past years have shown a transformation as first-generation Koreans gave way to Korean Americans. Yet the change is not in name alone. The addition of the second portion signifies a merge of cultures: the new generation is neither wholly American nor wholly Korean; it is a synthesis of both.

Korean Americans of the present age are no longer content with merely assimilating into American culture. Whether it be in the media, in everyday cuisine, or museums, they have fought to gain a corner of representation for their own culture in the melting pot that is America. The richness of Korean culture has been given a voice in America, and people are listening.