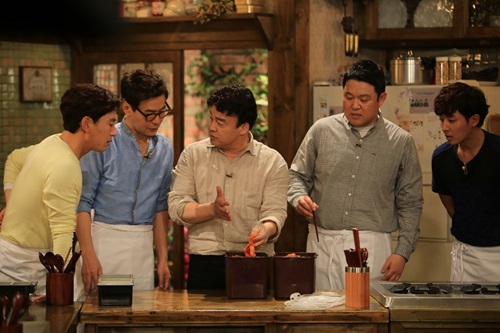 Currently, Korea is experiencing an ongoing craze for shows about food.

Some shows display the process of how the foods are made, and therefore show the recipes for food. This allows viewers to follow and make the same toothsome food at home. Yet Muk Bang, which translates as “Food-eating broadcasts,” are shows that are focused on the eating of food rather than its preparation.

“I really enjoy watching Muk Bang especially when I am in the States and therefore am not able to eat Korean food. They help me cope with my cravings,” said Stevenson School junior Julia Ahn in an interview with JSR.

“I really enjoy watching Muk Bang because I feel satisfied while I watch [people] making delicious-looking food. I can sense the popularity in Korea when I see video clips or pictures of them on social media [sites] such as Facebook and Twitter,” said Tiffany Jung, a junior.

As Jung said, Muk Bang shows are gaining more popularity through the spread of social media since more people are exposed to them on a regular basis. Famous celebrities who eat satisfyingly on screen have been referred to as “Muk Bang” characters. One of the most well-known is a Korean actor named Jung Woo Ha. The scenes of him eating voraciously in his movie “the Yellow Sea” have appeared numerously on social media.

Many Muk Bang celebrities appear on entertainment variety shows. Another famous personage known for his Muk Bang character is Yoon Who, the son of a singer named Yoon Min Su. They have both appeared on the reality show called “Dad! Where Are We Going?” including scenes in which Yoon Who eats vigorously.

Hwang Jin Mi, a critic of popular culture, said, “Koreans have long maintained the tradition of eating together with the family. However, as this culture has decreased, people get a second-hand satisfaction through people eating on TV shows. That is primarily why these Muk Bang have gained popularity.”

Recent shows include “Please Take Care of My Refrigerator,” a cooking variety program starring famous chefs and “Mr. Baek: The Homemade Food Master,” a program with Baek Jong Won, a chef and CEO of 26 restaurant franchises in Korea. His recipes and cooking performances have made many people interested in cooking.

“I think [food] shows are interesting because sometimes they give great recipes for housewives to make and give to their families,” said Elizabeth Kim in an interview with JSR.

Essentially, these programs have sparked many new creative food recipes that everyone can enjoy. However, other critics worry about commercialization as food companies use these programs for marketing.