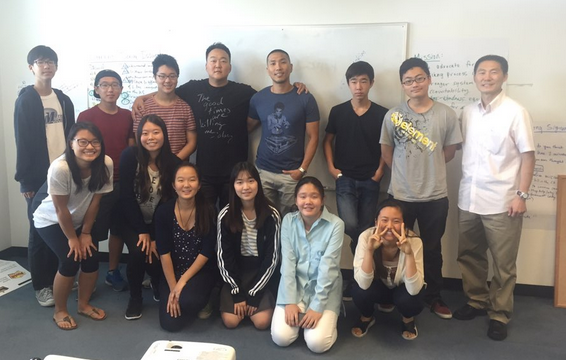 From June 15 to August 17, high school interns at the Korean American Youth for Leadership in Training (KAYLT) learned about the Koreatown community and its roots while becoming leaders themselves. During the program, held at an office in Koreatown, the interns developed leadership skills, experienced community organizing, and a community organizing project of their own.

In previous years, the interns at KAYLT have participated in community forums and different campaigns. This summer, as reported here, the KAYLT group hosted an event that took place on the first week of August regarding police brutality and racial profiling.

Besides planning an event regarding police brutality and racial profiling, the KAYLT group also worked to support AB 953, a bill in the state legislature that aims to reduce instances of police officers making decisions due to racial profiling and will create the Racial and Identity Profiling Advisory Board (RIPA) to restrict identity profiling. The group has collected signatures to help pass the bill in the California Senate.

Intern Jennifer Kim told JSR, “We as a KAYLT group have progressed this summer and were able to organize our own community project. Being able to learn see the community through the eyes of a community organizer brought a new perspective to the meaning of community and organizing. Joining KAYLT brought us together everyday, learning new things about the community, and developing our leadership skills.”

“We were able to learn more about transformative organizing, where communities help others even though they do not benefit from it. Not only were we able to learn more on police brutality and racial profiling, but also we learned that even the youth can be involved in community organizing,” shared Intern Joshua Yang

“I believed that we as a group were able to become new leaders in the Korean community,” he continued.

Over the eight weeks, the interns visited many non-profit organizations in Koreatown and learned about their different campaigns that benefit the Asian American Community. Upon graduation, the KAYLT interns gave JSR in depth on their experiences with the places that they visited but also people that they were able to meet.

They were able to visit Connie Chung Joe from Korean American Family Services and learned more about domestic violence in the households of Koreatown. The group was also able to meet with past Asian gang members Rico Kim and Peter Lee.

“We had the opportunity to listen to past Asian Gang members in Koreatown,” participant Esther Kim told JSR. “They spoke about the struggles that they faced as a child in Koreatown and what really happens when one is involved in a gang.”

The graduation ended with words from Grace Cho, who trained the KAYLT interns, and KAYLT president Do Kim.

Cho told JSR, “For the past eight weeks, I have had the privilege of working with 12 Asian American high school students from across the LA Metropolitan Area. Together, we learned how to engage with compelling issues in our society, understand each other, and advocate for the needs of other communities. I am so proud that they successfully completed a community project around racial profiling, and learned about an issue that may not directly address their self-interest.”

Do Kim, the president of the KAYLT Program, told JSR why he started the KAYLT program and his thoughts on this year’s KAYLT group.

“In April of 1992, I saw my community, Koreatown, burning in flames. Saigu (1992 Los Angeles civil unrest) lit a fire in me to return to Koreatown to work on rebuilding my community. I wanted to fill the vacuum of leadership in our community by training our youth to become strong advocates for their community but to also build coalitions with the African American and Latino communities on common issues that impacted all minorities.”

“It is our responsibility to pass on leadership to the younger generation,” he said. “It is just as important to work for the Korean American community as it is to work in the mainstream.”

He continued, “The racial profiling project is very timely. With all of the racial profiling and police abuse around the country in the past year against African Americans, Asian Americans also have to step forward to work on issues of racial and identity profiling that affects us all. We shouldn’t just sit on the sidelines simply because the people most affected are not Korean Americans or Asian Americans. Real leaders fight for justice for all people [and] we need leaders with vision to do just that.”

Kim concluded, “Whether [or not] the State Senate passes AB 953 does not determine for me whether the project was a success. [What is important to me] is the process of young people organizing to fight for justice that is important, to see them learn about their community, pick their own project, and to make it a reality… What is fulfilling for me is seeing young people interested in more than just grades and getting into college.”