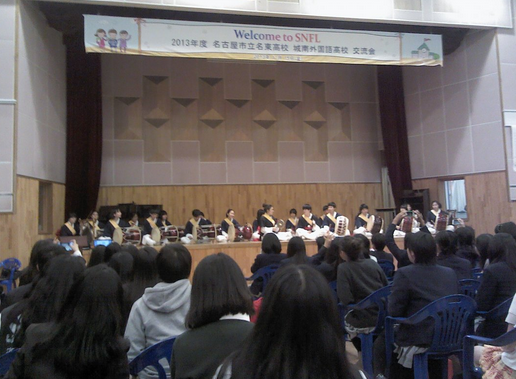 Korea and Japan have competed with each other, often with hostility, since Japan’s colonization of the Korean Peninsula from 1910 to 1945. Recent comments about that occupation from Japan’s Prime Minister Shinzo Abe have strained relations between the two countries. Yet this exchange encouraged peaceful communication between people from the two nations.

The students took classes and ate lunch together at the school cafeteria. After the lunch, they all gathered at the school’s gymnasium to participate in welcoming ceremonies including a Samulnori play by SNFL students and a Japanese fashion show introduced by Meito High students. Following the ceremonies were group activities, in which groups of eight to 10 students played games and learned about each nation’s unique customs.

During the program, Korean students had to use English or Japanese to communicate, for Japanese students did not understand any Korean at all.

“For those who could not speak English or Japanese fluently, it was a big deal,” recalled Yeonsu Kim, an SNFL student.

The language barrier, however, could not stop students from building respect for each other. Even the students who had been shy and reluctant to talk enthusiastically took part in group activities and were eager to take commemorative photos in the end.

When Meito High students had to leave, all students showed their wistfulness, some of them crying and others waving hands frantically to each other until the bus finally began to move and slowly disappeared from view.

“It was a very short but meaningful time,” said SNFL student Jihong Kim after saying goodbye to the Meito High students. “I thank the Japanese students for visiting here.”