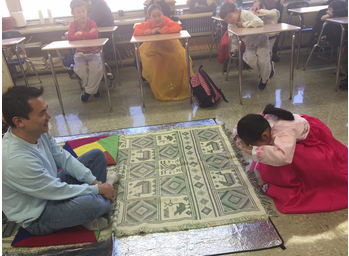 For some Korean Americans, the words “Korean school” bring back bad memories of having to wake up early in the morning on Saturdays to attend school — even when it seemed as though nobody else had to go through this.

As a veteran of Korean school myself, I definitely understand that feeling. However, I can appreciate the experience.

When I was younger, I really didn’t know what being Korean American meant. Because my family speaks English, and I live in America with hardly any Koreans around me, I was not exposed to the culture.

At school, I remember the class was having a discussion and we were all going around and sharing about something we struggle with. At first, I had everything planned out – I’d talk about stress with tests, or a fight I was in with my friends – but my mind suddenly drew a blank and I began to choke up having realized that I did not really have a place to fit in. That is, I was not really sure who I was. No matter how many times I thought about it, I did not know whether I was Korean or American.

As a second generation Korean American, I’ve realized how important it is for me to attend Korean school – a place I used to dread.

Hwang Hyun Joo, the principal of The Korean School of New Jersey in Tenafly told me, “Korean school is not just learning about the language, but it’s also about the culture, art, and history; I want the students to know their heritage because it will help them find their identities.”

Laura Kang, a graduate of The Korean School of New Jersey, said, “Korean school was a place where I could immerse myself in my Korean culture, which isn’t easy to find.”

For me, I’ve been able to experience various facets of the Korean culture, including Taekwondo, Korean brush painting, Korean musical instruments, and celebrations such as Lunar New Year and Chuseok. By learning about Korean culture, I realized the profound impact it has had in defining my identity as a Korean American.