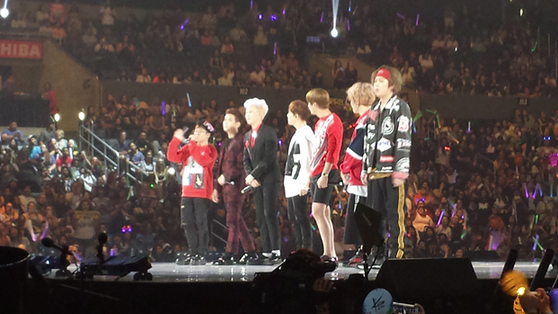 Since 2012, KCON has been provided an opportunity for K-pop lovers to create a strong bond between Korean and American culture through the concert. Event organizers claim that more than 50,000 fans participated in this year’s event, exceeding last year’s record of 43,000 fans.

“KCON was such a wonderful experience,” Julia White, one American fan of a Korean boy group Block B, said in an interview with JSR. White continued, “Meeting my favorite stars during the red carpet event was fascinating, and it was the most impressive and unforgettable moment in my life.”

Along with the concert, workshops were held in Los Angeles Convention Center from July 31 to August 2. Through those workshops, both Korean-Americans and Americans were able to enjoy elements of Korean culture including foods, cosmetic products, film, and fashion.

“KCON 2015 was one of the best concerts I ever went to,” Korean American fan Yoonji Kim told JSR. “I got to experience firsthand what went on backstage and the excitement the singers brought out of everyone at the concert. Learning about Korean entertainment culture was also very interesting, because I am also a big fan of Korean dramas.”

The event was also a valuable platform for Korean industries to connect with American fans to create business opportunities in the United States. There were 39 sponsor companies this year, each having their own platforms.

Bibigo, a Korean traditional food company, distributed their own unique food products for those who were in concert and Asiana Airlines choose one special ticket winner during the concert and gave her a free VIP airplane ticket to Korea. In addition, CGV, a Korean movie theater, introduced fans to Korean movies, dramas, and short-films. Thus, Korean business companies were able to appeal their unique roles they play in America to spread the Korean cultures worldwide.