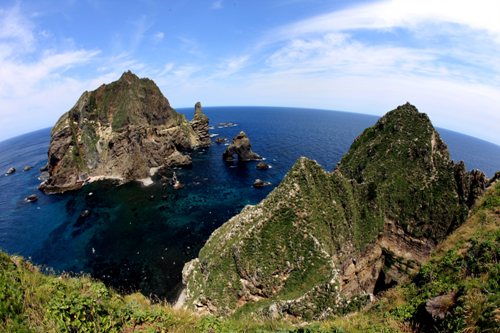 On Saturday, February 21, and Sunday, February 22, volunteers gathered in the Los Angeles Galleria Market for an event hosted by the Korean American Memorial Foundation of Patriot Kim Jwajin.

In celebration of the 70th anniversary of Korea’s independence, the foundation held a petition drive to change the name of Liancourt Rocks on Google Maps to Dokdo. Additionally, it held a Korean Flag handprinting activity. The main purpose of these campaigns, in addition to raising awareness about Dokdo, was to show Korean Americans’ love for Korea. Many people joined to sign the petition or color the flag.

During an interview with JSR, the foundation president Wook Chong Kwon stated,“The Korean Flag handprinting campaign is different in that little kids and foreigners could get involved in it. The finished flag is going to be sent to Korea… to let the Koreans know that we [Korean Americans] consent to our mother country, that we care and love it, and that we love our flag.”

Volunteers and hosts of the campaigns also emphasized the importance of the petition.

According to Kwon, “[Google Maps] made a mistake of putting a wrong name that doesn’t even exist. Japan propagandized that Dokdo is its territory, but this is wrong. Because we know that, we are trying to tell Koreans, as well as Americans, what’s right and fix the incorrect information.”

Many Korean Americans share Kwon’s perspective. Yet Google may have used the label Liancourt Rocks, a name derived from a French whaling ship that visited the islets in the 19th century, to sidestep a territorial dispute between Korea and Japan.

Both Japan and Korea have claimed Dokdo as their own based on different arguments. Many Koreans have been arguing for Dokdo as a Korean territory based on the mention of an island called Usando, which they believe refers to Dokdo, in historical documents. Japan has claimed that the Usando mentioned in historical records refers to Ulleungdo, another island next to Korea, and that Dokdo belongs to Japan.

Jennifer Lee, a student passionate about Korean culture, told JSR, “Even if there is a dispute over the Dokdo territory between Korea and Japan, Korea clearly has the territory rights. So there’s no reason for Google to change the name. It’s wrong. It’s not up to them to decide what name they are going to use. It’s not been agreed upon internationally.”

The petition campaign garnered approximately 400 signatures on Saturday, and 100 people participated in the handprinting event. Organizers plan to continue petitioning until they have 50,000 signatures.