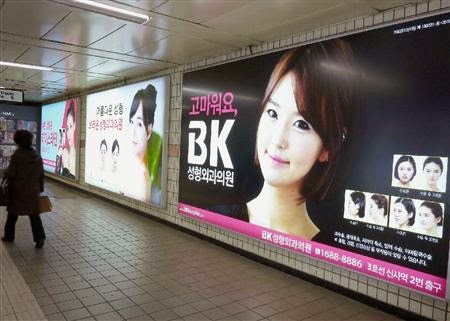 Going under the knife, usually done for medical reasons, is a scary thought for many people. However, South Koreans are embracing the rapidly increasing trend of elective cosmetic surgery in a bid to improve their appearance.

In a survey recorded in July by the Seoul Metropolitan Government and reported by Jung Hyun Lee of the Huffington Post in Korea, almost half of the teenage boys living in Seoul stated that they would undergo plastic surgery to improve their appearance. Approximately 49 percent of the teenage boys between the ages of 15 and 19 said “yes” when they were asked if they would have the surgical procedures. Only 17 percent responded “no,” while the rest were ambivalent towards the subject.

The statistics mark a sharp change in the data from seven years ago, when almost 59 percent of adolescent males responded negatively to the idea of surgical enhancement compared with 17 percent who accepted it.

A survey conducted by the Seoul government in 2011 demonstrated that appearance was one of the top concerns for male students. Looks ranked fourth following education, careers, and income. According to a similar poll conducted last year, more male teenagers aged 15 and older consider plastic surgery as acceptable and even positive as they believe that people are being judged and discriminated against because of their appearance. The survey also showed that that outlooks on the subject have become more liberal as cosmetic surgery has grown common and become a less taboo subject in Korea.

Further research conducted by the government explained that the two most evident factors that have caused the trend are improvement in techniques and the proliferation and encouragement of surgery in the media and popular entertainment.

In a recent interview with JSR, 16-year-old male student Kim Joon Hee stated that “surgery is required for most people to boost self confidence and be attractive.”

“Yes,” he answered without hesitation when asked if he would undergo the surgery later in his life. “I would.”

The Seoul government has described the increase in plastic surgery as “unfortunate,” restricting the number of plastic surgery advertisements and advocating for campaigns such as the billboard campaign launched in 2012 in the Gangnam District called “Against Plastic Surgery.”

Many opponents of this increasing trend state that there is no excuse for the negative aspects of surgery.