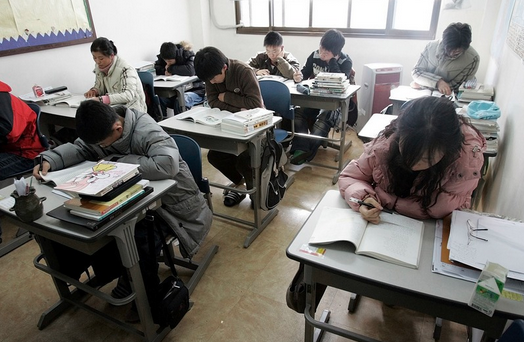 The countdown towards the state-administered College Scholastic Aptitude Test (CSAT), or “suneung,” has begun as eighteen-year old Korean students prepare for a test that plays a huge role in college admissions. As students make their final preparations for this November 13 exam, the approach of a test that students for which students have spent 12 years of preparation puts huge amounts of stress on their shoulders.

The suneung is an eight-hour long exam that all Korean students are expected and which plays a key role in admissions to the best colleges in Korea. During the test, the nation makes special adjustments to accommodate the more than 650,000 text-taking students. Planes are rerouted or grounded for half an hour during the English-language section, the police marshal traffic, and public facilities all open one hour late to ease congestion on the roads.

Unlike the SAT and ACT, which can be taken multiple times, the CSAT can be taken only once at a designated date for every student. Every student receives the same test at the same time, with one chance to prove their ability relative to that of everyone else in the country. The CSAT does not allow room for mistakes, and a single point off could impact a student’s future.

As the test plays such a huge role, there is a great pressure on students to do well. Many students, and sometimes their mothers, commit suicide for failing the test. One survey by the Korea Youth Counseling Institute showed that up to 48 percent of students have contemplated suicide. Because students begin studying for this one exam in elementary school, they feel as if their entire lives have built up for this moment, and disappointment can be crushing.

“It’s like this one test score determines my entire future,” said Tae-wook Park, a student at Sejong High School, in an interview with JSR.

“It’s commonly known that this exam determines what college you go to, which in turn determines your future job,” he continued. “Just one mistake could land you in a more lowly ranked school.”

With a bit more than two months left until the exam, students now struggle to wrap up the preparation of more than a decade.