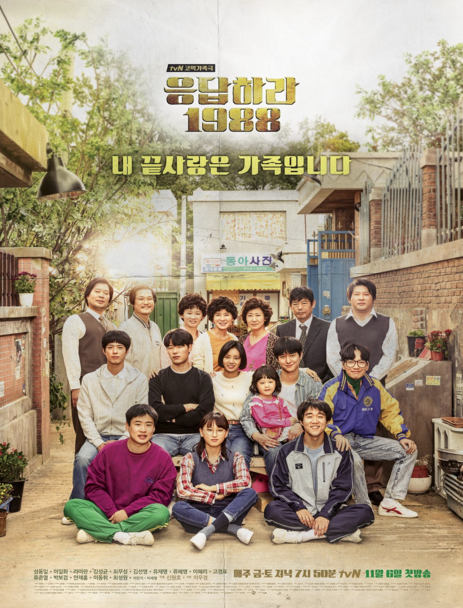 The new Korean drama, “Reply 1988,” has recently been gaining the love and attention of many fans within the Korean community.

There are four main male characters, and a female lead as well. These five protagonists are a family-like group of friends who have known each other since childhood. There have been two other “Reply” series, “Reply 1994” and “Reply 1997,” and each drama represents a certain time in Korean history. Regardless of the date, however, all three of these series show maturity and development among the main characters and emphasize minor and major events from that period.

In an interview with JSR, audience member Jun-woo Lee praised the show and expressed his pleasure in being able to experience his youth again.

“Since I was in high school in 1988, I can relate to most of the events,” said Lee. “The drama does an amazing job of allowing me to feel as if I’m in my younger years by having both a comical and serious tone.”

Age doesn’t matter, though. When watching “Reply 1988,” the audience is transported to that time period. They are in high school, have the same dilemmas, and all share the same favorite celebrities and latest trends as the actors in the drama. They are living in 1988.

One of the main reasons for the drama’s success is how intense the actions are, without being overly exaggerated. Another reason it appeals is because it includes portrayals of a variety of historical events.

In 1988, Korea was still recovering from an economic decline. “Reply 1988” makes sure to portray this detail by depicting poverty amongst the characters and in the conditions of their houses, food, and clothing. Important occurrences, such as student protests that occurred throughout the year in opposition to President Roh Tae Woo and his government’s collaboration with the United States, are also shown and described clearly.

“It’s quite impressive how such details were remembered,” said Lee. “One genre of details I find hilarious is the advertisements from that time and how all the students in the drama try to copy them. What they do is true; those who were my age in 1988 attempted to copy many of these ads, and so did I.”

The historical events also make “Reply 1988” a family-friendly drama. Though the show deals with mature topics and may not be suitable for kids of all ages, many parents allow their children to watch it since they can learn so much more about Korea’s history within the period of two hours each week.

“I watch ‘Reply 1988’ with my parents every week,” said Angie Lee, Jun-woo Lee’s 14-year-old daughter. “I don’t know that much about Korea’s history since I was born in the US, but by watching this drama, I learn interesting pieces of history and am able to spend quality time with my parents.”

In addition to achieving success through historical events and comedy, the actors bring the drama to life and have been highly praised by critics because of their abilities to seem as if they are really students in 1988.