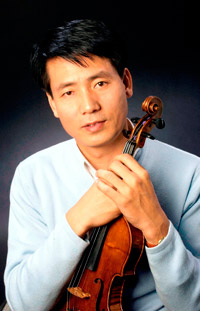 On Sept. 21, the Love in Music Foundation held its annual concert in Anaheim. Love in Music is a nonprofit organization that provides tuition to help underprivileged kids learn to play musical instruments.

In-Hong Cha, Associate Professor of Music and Director of Orchestral Studies at Wright State University in Ohio, was the featured performer at the event. Cha was once very poor and has a physically disability that causes him to need a wheelchair. Yet, he has become an influential and inspirational musician.

At the concert, In-Ho Cha played selections from Kreisler, Shostakovich, Vivaldi and more. The concert also showcased the children who were learning to play their instruments. The children came together and played a song with their teachers, showing their parents how much they had learned since they first began lessons.

Halfway into the concert, Cha shared the story of how he became a violinist and musician. He shared that when he was young, he was taught the violin by a student volunteer like those at the Love in Music Foundation. His teacher was dedicated and drove far to meet him at his training center. Because of his teacher’s dedication and his determination to do well, he became who he is today.

Through her, he was given the opportunity to become a wonderful and influential musician. He believes that his opportunity to meet her was a spiritual blessing. During his story, Cha said that he knows results won’t come right away, but once the volunteer “plants the seed” it can flourish with guidance, care and love.

According to Cha, the concert was touching because it allowed him to remember how he was as a child.

“I was invited to give something to the people, but I gained something from them and tonight became a memory that I can look back and smile at,” he said. “I wish.. [to] show them that they too have a chance at becoming musicians.”