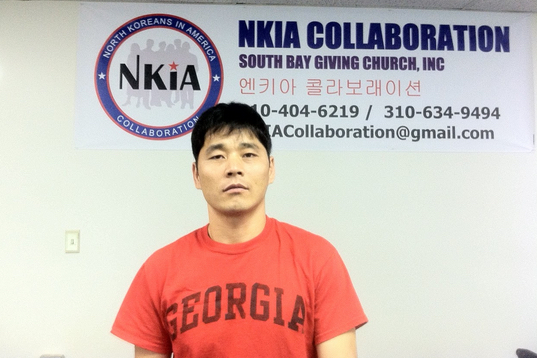 Hyun, also known as Sammy during his hours as a sushi chef, is a refugee currently making his home in Southern California with his wife and US-born son. Having escaped one of the most militarized zones on the planet in 2008, Hyun survived crossing the Tumen River, fleeing to a UN base in China, and seeking refuge.

During his life in North Korea, Hyun was the youngest of three children in a family with an invalid father, leading a harsh life that began in poverty. When he was 16, Hyun was sent to the military and served for 12 years without any leave to see his family. Upon his release, Hyun came home to discover that his parents had both passed away and that his sister had escaped to South Korea.

“I saw my sister as a bad person because I believed that the regime was right at the time, and I thought of her as someone who was no longer my sister,” Hyun said in an interview with JSR that was conducted in Korean and translated.

The year after his release from military service, Hyun was employed as a government laborer. During this time, he rarely received his monthly wages and consequently, could not buy food.

“After a year of starving, I found hope in the fact that my sister was living in South Korea, and I decided to cross the Tumen River into China to call her and ask her for help,” he continued.

Although his sister advised him to escape down to South Korea, Hyun refused. He wanted to live in North Korea, albeit with money for food.

“But as soon as I stepped foot back into the country,” Hyun stated, “I was captured, my money was all taken, and I was sent to jail for six months and then to a rehabilitation camp for another six months. So for a year, I was in captivity.”

“During that time,” he continued, “my perspective changed drastically. I realized that the country I lived in had done nothing for me even if I had worked hard for the regime. The regime had thrown me in jail and taken away my money even though I’d returned from China to live my life within my country.”

Hyun decided to escape in 2004, finally embarking in the attempt in 2007 after persuading his wife to follow. Although they were successful in crossing the Tumen River into China, Hyun suffered losses that he still remains reluctant to speak about it in depth.

“We had some heartbreak in our journey,” he said during the interview. “We lost our daughter.”

The couple sought refuge at a UN base located near the border, where they were asked where they wanted to live after a period of assimilation.

“We learned a lot about both Korea and the US, which we’d previously thought was the enemy, and we decided that even if it was hard for us, it would be better to live in America for our future children,” stated Hyun.

Since their journey to the US, Hyun and his wife have had a son. In February of 2014, Hyun was also given the opportunity to hold a wedding ceremony with his wife with donations from Korean Americans in their community. Despite his initial gratefulness for such a chance, Hyun also became wary about the public’s perception of him and his fellow refugees.

“When I thought about it, I realized that I had received so much… too much actually. It was true that most [of what North Korean refugees] had done was receive things. While many Koreans helped us, there were others who cursed at us, saying that it was a waste of resources to help us because we weren’t grateful, and that it was a pain to have us around,” Hyun said.

He continued, “Eventually, I realized that this had become our image, as North Koreans. After our free wedding ceremony, I felt like there were people who were thinking those things about my wife and me. So after the honeymoon, I decided to visit some homeless shelters in LA and bring them food and money in order to give back to the community.”

Since then, Hyun has been an active part of the development of North Koreans in America (NKIA), serving as its vice-president. Formed in February, the organization’s purpose has been to organize North Koreans in the area to reverse public perception by volunteering for various causes.

“What I’m so thankful for in having started this organization is that I’ve realized that I have been so incredibly blessed in being here. I used to think that I was worse off, that I led a hard life because I couldn’t speak English and had other difficulties. But after giving back and seeing other parts of society here, I’ve realized that we are extremely lucky,” Hyun said.

He continued, “When I look back on how I used to live in North Korea, I realize how much of a different world it was compared to where I live now. I helped both of my brothers’ families escape after I got out. I realized that we had been living in a wrong world, and that I had to get my family out from such a place. It was such a blessing that we were able to escape.”