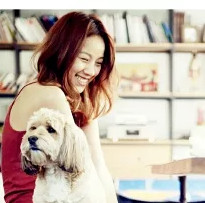 The rate of dog adoption is rising in South Korea.

In Korea, about 20,000 to 50,000 dogs are being abandoned every year. According to the Naeil newspaper, 80% of the stray dogs are sent to animal shelters where they are kept in hopes that they will find a new home.

The Joongdo Daily has reported that, in a recent survey, more than 90% of people who adopted abandoned dogs responded that they are satisfied with their new pets, and 95% of them said they would adopt another one if they can. Also, 77% of the stray dogs became healthier after they were adopted.

It is well known that Korean singer Lee Hyori has adopted a stray dog name Soonshim. The singer has stated that her life became more cheerful after she adopted the dog.

She first met Soonshim on a voluntary service trip to a shelter and has been quoted as saying, “I adopted Soonshim because unlike other dogs she was being left alone.”

Before Soonshim was adopted, she had a uterine infection called pyometra. After she was adopted, however, Lee got her the treatment she needed to become well.

In an interview with J Student Reporters, Geumok Kim, another person who has adopted a stray dog, said, “After I adopted the dog my stress level was lower. And, I feel less lonely than before.”

Regarding the rate of abandonment, Kim told JSR, “The fact that the dogs are being thrown out because they can’t speak makes me distressed. People should think their pet as one of the family members, not as an item.”