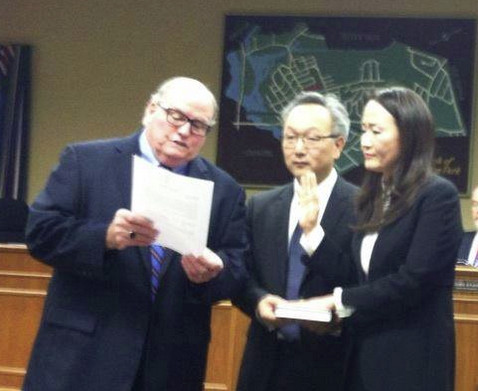 According to Joon Chung, a city councilwoman in the Northern New Jersey town of Harrington Park, Korean Americans should become more active in their communities.

There are more than 1.7 million people of Korean descent residing in the United States, and Korean Americans form one of the largest and most rapidly-growing immigrant groups in Northern New Jersey. Yet, according to a study published by the Pew Research Center in 2014, Asian Americans “lag behind” other groups in voter turnout nationally. However, participating in politics and exercising the right to vote are vital for minorities such as Korean Americans because politics provides opportunities for them to voice their opinions.

In an interview with JSR, Councilwoman Chung stated, “We absolutely need to be more civic-minded people who are concerned with the well-being of our community. In order for us to become active citizens, we must be well-informed.”

Before she entered civic office, Chung worked as president of a Korean Parents’ Association and implemented a volunteerism program at Harrington Park School. Harrington Park School received the Jefferson Award in 2012, a prestigious national award honoring community and public volunteerism. According to Chung, although not everyone can show leadership and representation for the Korean American community as politicians, it is important for both students and parents to be more active.

“I immigrated to the United States in 1983 at the age of 15 to Harrington Park,” she told JSR. “I grew up in a busy city with high fences between neighbors and was taught not to talk to anyone. Although adjusting to a new culture was challenging, I was fortunate to meet many hospitable people who were welcoming.”

During the interview, Chung gave advice to other Korean Americans who want to take the initiative to be more involved.

“Many students,” she said, “believe that in order to get involved, they need to possess certain skills. Therefore, they wait until they become ‘somebody’ [to get involved]. Unfortunately, the perfect timing never comes and they realize they have not accomplished all that they dreamed about.”

She continued, “Get involved. Join clubs and service organizations that impact our world in positive ways and build communities — not just our resumes. Get to know your neighbors. Value them and share your life with them. In order to serve as an advocate for your community, you need to know the members of your community. Speak with your local officials… and don’t be shy asking for help.”

“The kind of leaders we need today are people who react today,” she concluded. “True leadership comes from within — that quiet inner voice that tells us to act when we see injustice or human suffering. Listening to that voice will lead us to react with courage.”