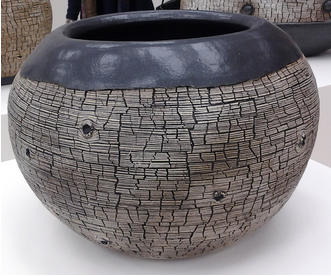 The American Museum of Ceramic Art (AMOCA) in Pomona, Calif. is hosting the ongoing exhibition “ICHEON: Reviving the Korean Ceramics Tradition” through the end of the year. On Nov. 9, the museum held a fundraising gala including traditional Korean instrumental performances and demonstrations.

“The American Museum of Ceramic Art and its members are honored [to have this art],” stated AMOCA president David Armstrong in the program brochure. “We are indeed proud to be a part of this prestigious international event.”

South Korean comedian Johnny Yune hosted the reception, which was attended by a group of civil leaders from Southern California and Korea, including Icheon Mayor Byung-Don Cho, and Pomona Mayor Elliott Rothman. The officials exchanged gifts and honors, including the gift of Honorary Citizen and Honorary Ambassador of Icheon City to lawyer Edward Ahn, who was responsible for the inception of the project. The certificate was engraved on a celadon ceramic dish crafted by the Master Hand Artists, who were also present to receive certificates recognizing their contribution to the Icheon Ceramics exhibition.

The exhibition celebrates the center of craft industry in the Gyeonggi-do region, which has been called the “Mecca” of Korean ceramic craft today. Icheon is internationally renowned for its long and rich ceramic culture and is the first Korean city to earn the title of City of Crafts and Folk Arts in the United Nations Educational, Scientific and Cultural Organization (UNESCO) Creative City Network. Over 350 studios and potteries are located in the city.

The exhibition, which is taking place during the sixtieth anniversary of South Korea’s political alliance with the United States, is the first time Icheon has connected with an institution in the US to present its ceramics. Over 230 pieces, crafted by Master Hand Artists Choi In-Gyu, Kim Seong-Tae, Cho Se-Yeon, Yoo Yong-Chul and Lee Hyang-Gu, are being shown on American soil for the first time.

“Hopefully, today will be the starting point of the revival of Korean traditional ceramics,” said Cho in his speech at the reception. “Icheon ceramics represents Korean ceramics as a whole, and this is the first step it is taking into the world— not only to make our ceramics known but also to learn. Thank you for helping [make Icheon ceramics’] first step a strong one.”

“This 5000-year-old tradition has been admired, collected and imitated throughout the East and West over the centuries,” said Shin in his remarks. “Even with influence from outside sources, it can only be described as uniquely Korean. Icheon ceramics is at the center of this coveted tradition and has secured its position as the throbbing heartbeat of Korean art. It is truly a delight to see these magnificent pieces on display for the very first time.”

A documentary on the five Master Hand artists and the exhibition is currently being filmed by director Michael Oblowitz and will star model Estella Warren. Yet interested people can go to the exhibit before it closes on Dec. 29. On Dec. 14, AMOCA will host a lecture featuring Dr. Edward T. Chang, who will discuss Korean-American army hero Young Oak Kim, and Dr. Kelly Y. Jeong, who will talk about Korean Modern Art.

AMOCA is located on 399 North Garey Avenue in Pomona and is open from Wednesday-Sunday each week. Admission to the museum is $5 for adults, $4 each for students and the elderly, and free for children under 12.