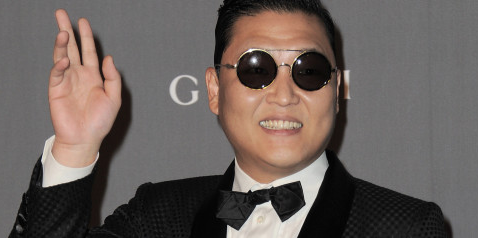 South Korean pop star Psy rose to international fame when the music video for his song “Gangnam Style” went viral on Youtube in 2012. The song has led to global interest in South Korea and an  appointment for Psy as the nation’s tourism ambassador.

The new force’s connection to the song is in their uniforms, which were designed by Kim Seo-Ryung, a Korean fashion designer who created costumes for Psy’s hit video. At the inauguration ceremony, the officers performed the signature “horse riding dance” from the video.

However, the new force is more than just a gimmick.

The Gangnam Style force consists of 100 men and women who were specially picked for their linguistic skills. As a response to complaints of overcharging from tourists, the force will be cracking down on price gouging merchants and taxi drivers as well as providing language assistance to visitors in English, Japanese, and Chinese.

“Those who think they were overcharged by taxi drivers or street food vendors can come and talk to us. We will help settle the problem,” said recruit Park Jae-Hyung.

South Korea’s Tourism Board (KTO) stated, “These tourist police officers will be patrolling major tourist areas in Seoul such as Myeong-dong, Insa-dong, the Itaewon Tourist Special Zone, and Hongdae.” However, the police force is also planning to spread to other popular tourist sites like Jeju Island.

“At the moment we don’t have enough personnel to expand the service to other regions, but we are planning on hiring more officers. By early next year, we are planning on launching tourism police in Jeju Island. We will also expand the service to cities such as Busan and Incheon,” said Ryu Hyun-cheol, director of foreign affairs planning division at the National Police Agency, according to Korea Times.

“I was really excited to hear about this police force. Even though I’m Korean, I’m not a great Korean speaker,” said Ashley Choi, a high school junior. “It’s great to hear that the next time I go to Korea, I’ll be able to get some help.”

At the inauguration ceremony, KTO president Lee Charm told the recruits, “You are ambassadors who promote how safe this country is. From now on, you guys will be very busy having pictures taken with tourists.”