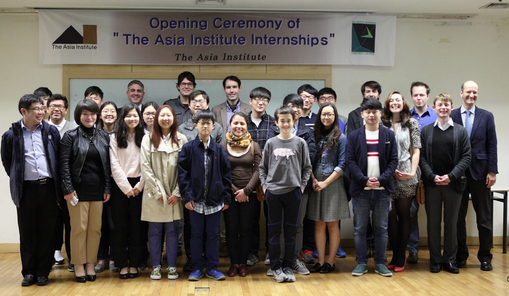 As their final summer breaks as high school students came to an end earlier this month, international students in Korea shared their summertime experiences with JSR. Students visited colleges, took internships, and worked on college applications.

Many students flew to the United States and toured a variety of schools, ranging from liberal arts colleges to research universities. They were greeted by a series of educative sessions like information sessions, campus tours, and interviews with admission officers.

“I didn’t expect too much but the college trips really helped me to identify the pros and cons [about certain schools] that I couldn’t see online,” said Terry Lee, a rising senior at Korea International School (KIS). “The schools I wasn’t too sure of became a few of my top choices.”

Some students, on the other hand, attended summer programs held at colleges. Students attended programs like the Yale Young Global Scholars, the Columbia pre-collegiate program, and the Northwestern writing program.

Min Byung Chae, a rising senior at Seoul Foreign School, said, “The program I attended focused on international relations and security. It drew historical examples and contemporary issues for us to think [about] strategically and negotiate potential responses to international dilemmas. It was definitely challenging, but an interesting experience.”

Some students pursued internships in either the US or Korea.

I personally interned for the Tibet Fund in New York. At the Tibet Fund, I learned more than I ever expected. Not only was I exposed to a hands-on approach on administrative tasks and social media projects, but I also met interesting people.

In Korea, The Asia Institute provided internship opportunities for high school students. Here, students conducted research projects in groups of three or four and discussed a range of topics from social community to urban planning.

Jimin Kim, the president of the internship program, explained the project in depth: “It’s a five months-long group study about social welfare, urban planning and technology with a particular focus on Seoul region. Students will have to prepare a 10 minute long presentation and arrange interviews with experts.”

After months of college tours, internships in labs and non-governmental organizations, and summer programs in universities, seniors returned back to start on their college applications. With the Common Application opening on August 1, seniors hurried to familiarize themselves with the website.

“I’ve somewhat started on my Common Application main essay. I’ve thought about it for a while now and I’m in the process of writing my first rough draft,” said Jamie Koo, a senior at Yongsan International School of Seoul.

Near the end of the summer, President Park Geun-hye announced that Friday, August 14 would be a national holiday to celebrate the 70th anniversary of Korea’s independence from Japan. Though this shortened the first week of school by a day, some students still expressed trepidation about summer’s end.