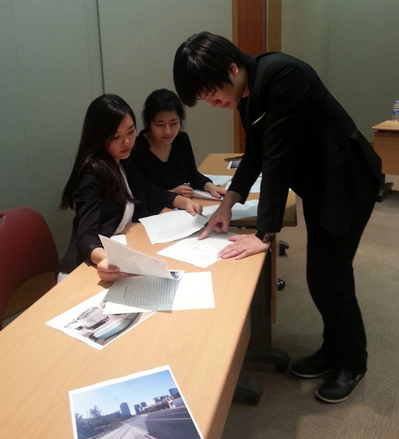 Since 2009, students from all over Korea have come twice a year to act as attorneys and witnesses for both the prosecution and defense side. YMTA members host workshops for each team and act as judges at the tournament.

“Mock Trial is more than a simulation of a trial that is rehearsed to learn about the legal system in a competitive manner,” said Elenna Na, a student coach at Yongsan International School of Seoul (YISS), in a discussion with JSR.

Jihoe Yoon, a student at Korean Minjok Leadership Academy (KMLA) who competed as an attorney at the recent competition, said, “We were able to compete with other schools and be able to see how others approached the case.”

“I met new competitors and new judges who took different approaches to a same given case,” said YISS senior Kelly Min. “The competition as a whole was nerve-racking, yet I learned so much.”

Eighteen teams were present, as the middle school and high school divisions were merged this year. All teams were power-matched to challenge other teams after each round.

Individuals earned points for their teams either through acting or through questioning. Witnesses had to answer questions by both prosecution and defense attorneys, who also had to make opening and closing speeches. A team’s wins and losses were based on every member’s points, so one mistake by a member impacted the whole team.

After a month’s hard work, participants cheered loudly once the results were announced at the end of the two-day tournament.

Michelle Lee, a graduate of Korea International School, only expressed one regret in her interview with JSR.

“I wish,” she said, “I could’ve joined the mock trial team a little earlier.”