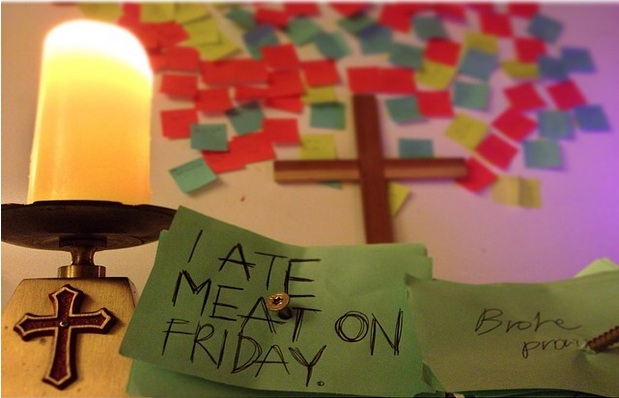 On March 28th, the Sungsam Korean Catholic Center held its fifth monthly youth night. Although it was its fifth one, this youth night was a little different than previous ones because it marked the season of Lent.

Instead of a night full of games, laughter, and singing praise songs, the teachers gave lectures and allowed the students to reflect on their behaviors throughout the season of Lent. A church friar also came to read and provide an in-depth explanation of the biblical passage of the day, James 1:12. Students also engaged in the sacrament of confession by admitting transgressions such as eating meat on Fridays during Lent or breaking promises.

They ended the night with the Stations of the Cross, depicting the crucifixion of Jesus Christ, and prayed for themselves, loved ones, and those in need.

Though some kids expressed annoyance at the hours of lectures and reflection, they also found importance in the rituals and lessons.

Junior Gean Park, a newcomer, said, “This event was boring but very valuable at the same time. Boring because it was very lecture like, but valuable because these lectures [can guide] you throughout life.”

Yet Park added, “I had high expectations, but I think they were a bit too high.”

“I feel that this Youth Night was really religious, and it kind of made me miss all the other Youth Nights like the Halloween one,” said freshman Yoojin Jeung in an interview with JSR.

However, the Lent event will not discourage Jeung from attending future events.

“I love all the Youth Nights,” Jeung told JSR, “so I’m actually excited for the next one!”