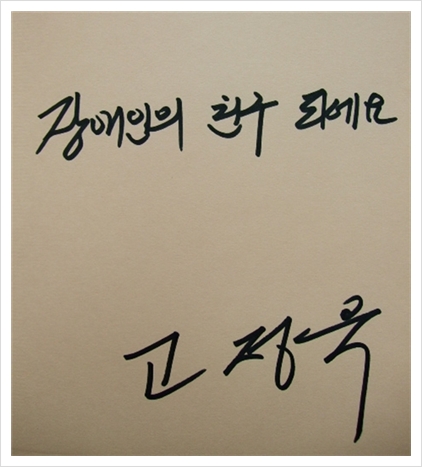 The characters in the plot are actually some of the numerous students that Go has met through more than 300 lectures. The novel gives both an insightful and touching message to the teenagers going through hardships.

Though he appears successful today, Go has gone through trials and failures. He had infantile paralysis when he was one yeas old, and was determined to be a first level physically-challenged person by the government.

Despite his physical discomfort, he studied diligently to become a doctor. However, he later found his dreams collapsed because of a policy preventing disabled people from enrolling into medical schools due to difficulties of experiments and practical training.

Later on,  he entered the department of Korean literature instead and has eventually published numerous best selling books. Some of his best known books are A Pianist with Four Fingers, A Kid who Carries Bags and My Special Brother. The main motif and grounds of his books is disability.

In an interview, Go said, ” I thought, ‘…I should be the one who writes about this defect. Who beset knows what disability is? Who best knows what pain it has? Who knows the discrimination and prejudice that lies upon everyday? I will be the one who loudly voices these stories and emotions to the world.’ These thoughts motivated me… The greatest thing I can do to make the world a better place for disabled people is to write.”