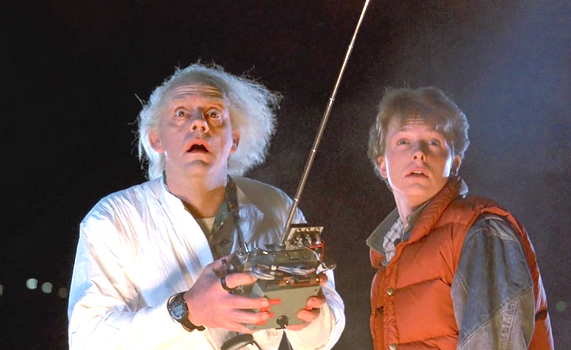 In 1985, director Robert Zemeckis blew people away with the first installment of the time travel trilogy “Back to the Future.” In the second film, released in 1989, protagonists Marty McFly and Doc Brown travel to October 21, 2015. Though there are no hoverboards today, Jaws 19 hasn’t been released, and the Cubs still haven’t won the World Series, “Back to the Future” still endures after thirty years.

One reason why the films work is that, though they are based loosely in science fiction, there are still elements of other movie genres integrated into the entire story. In addition to the DeLorean time machine, there are plenty of comedic moments and high school dramas that blend well with the tone of the film. Futuristic and past elements are intertwined well in the trilogy, as demonstrated by the contrast between Doc Brown’s inventions and the iconic moment in the first film when the McFly “invents” rock ‘n’ roll by performing rendition of “Johnny B. Goode.”

As a series, the movies stand the test of time. Zemeckis crafted three films that flow together so well, with each new installment picking up right where the last film left off. Instead of a franchise like “Indiana Jones,” with three episodic stories that don’t connect, or “Star Wars,” which is part of a broad universe of stories that extend far beyond the original trilogy, the “Back to the Future” films are three acts in one complete story.

All of these films are part of a line of blockbusters that find a perfect balance between entertainment and substance. Films such as “Back to the Future,” “Star Wars,” and “Raiders of the Lost Ark” don’t have to be overly serious in order to be thought-provoking or discuss humanity. They use simple character arcs, yet tell them in new and different ways. The tones of these films are not extreme, but they don’t need to be. They succeed because their aim is to entertain.

While many recent movies have entertained audiences only to be forgotten, the “Back to the Future” films are remembered and beloved by countless people. I’m sure that if I went 88 miles per hour into the future – maybe another 30 years from now – these films would still be in the memories of those who have seen them.

On this anniversary, perhaps a new generation will be introduced to “Back to the Future.”