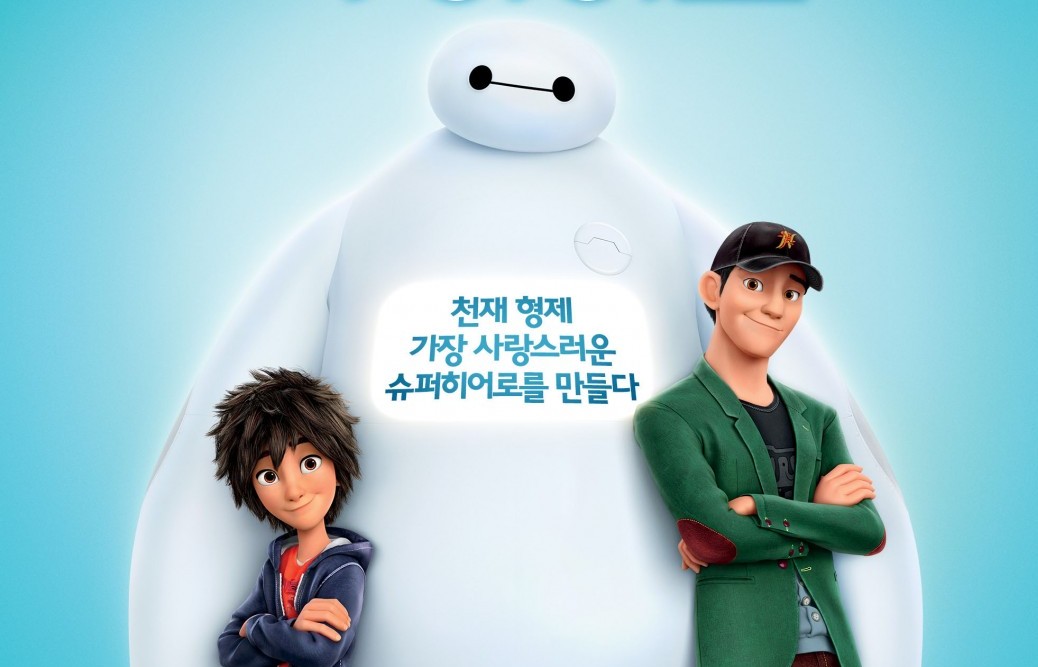 After achieving success with the adventures about a video game villain seeking to make himself a hero and the tale of a lonely ice princess, Disney’s animation team is back again to enthrall audiences with its new film: the story of a child genius Hiro Hamada and his medical balloon robot Baymax, which hit theaters on Nov. 7 2014 in the US and Jan. 22 in South Korea in their movie “Big Hero 6.” Raking up more than $500 million at box offices worldwide, “Big Hero 6” has been a huge financial and critical success and just won the Academy Award for Best Animated Feature Film.

Originally a Marvel comic, “Big Hero 6” can easily appeal to audiences of all ages with its lovable, marshmallow-like robot. While Hiro is a fast-paced character who’s in a rush when he gets excited, Baymax is often slow due to his design. Throughout the film, the interactions between the child prodigy and the his robot bring smiles to the audience, such as when Hiro flies into the sunset with Baymax. The movie also explores the deeper ideas of healing over traumatic experiences, as Baymax’s biggest goal of the movie is to heal Hiro’s emotional scar from the past.

“[My favorite aspect of the movie was definitely] the characters because they’re not fake and you can actually feel the emotions they feel,” said Rachel Yoo, Sophomore at Seoul International School. “Oh, and unlike most Disney or animation movies, the characters don’t experience the typical ‘happy ending’ and the movie actually has some twists that you don’t really expect. Plus, Baymax is just really cute.”

“Big Hero 6” also has amazing and beautiful graphics. From Baymax’s adorable balloon-like body to the beautiful Japanese-inspired city as our protagonists fly over it, the movie lives up to previous Disney movies. While the graphics are computer-generated, they retain a strong sense of reality within the film.

The directors have thoroughly experimented with the idea of Baymax being an inflatable robot, using their imagination to outfit Baymax with various functions that offer both comic and emotional appeal to the audience.

“My favorite aspect of ‘Big Hero 6’ was definitely the character Baymax,” said Karen Joo, Freshman from Seoul International School. “He’s presented as a character of not only humor, but also generosity and care, which was very touching and inspiring. His character plays a key role in this movie, as he teaches us about love and sacrifice.”

The movie had received criticism from Korean citizens when its trailers were released, as some of the original location designs included Japanese nationalistic symbols such as the rising sun of the imperial era. To appease Koreans, Disney changed much of the Japanese influence. For instance, Hiro Hamada’s name was changed to Hero Armada and his brother Tadashi was named Teddy. Furthermore, Disney changed the Japanese-influenced city by removing all Japanese characters and replacing them with English words.

“I think this definitely demonstrates the remaining bitter relationship between Korea and Japan, ever since the Korean Japanese War in the twentieth century,” said Joo during her interview. “These two countries have never seemed to agree or approve of each other’s past actions, and still continue to do so today.”

Regardless of the initial opposition by some Korean citizens, “Big Hero 6” still had a strong opening in Korea. Variety reported that it came out on top of the box office between Jan. 26 to Feb. 1. Fans of Disney’s other animation films such as Frozen and any other people wanting to watch a light, fun movie should definitely try to watch Hiro and Baymax try to save the world from a nanobot-wielding villain.