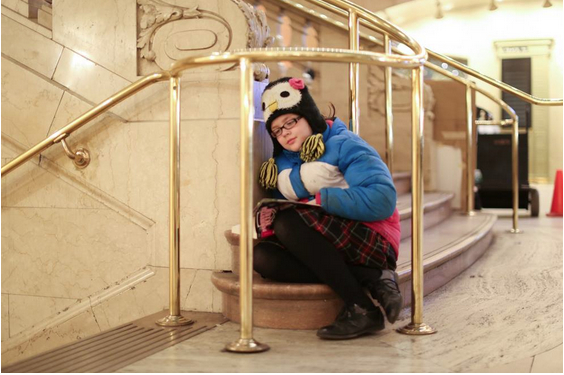 New York is known for the anonymity and detached city life depicted in television shows like the CW’s “Carrie Diaries” or USA Network’s “Suits.” Yet Brandon Stanton, founder of the photoblog Humans of New York (HONY), has been reversing this perception of the city by capturing still moments of everyday residents.

With no prior background in art or photography, Stanton started with a goal to capture at least 10,000 portraits and create a map of New Yorkers in different regions of the state. However, throughout his journey, Stanton has shifted his focus onto the randomness and spontaneity found in the personal stories of people he meets on the streets.

In an interview with the Epoch Times, Stanton said that he aims to make it “difficult to find a thread” in his work.

“I do that,” he continued, “by keeping a completely open mind and just looking at everybody and anybody who strikes me for any reason… [and] makes me double-take. Normally it’s when I was trying to take a certain picture, and something completely unexpected happened that the picture turned out to be 10 times better than I thought it was going to be.”

Stanton has captured around 6,000 portraits and has over four million likes on his Facebook page. He chooses to focus his energy on his HONY project and currently holds no other job.

Coupled with action or portrait shots of New Yorkers, Stanton usually adds dialogue from the photograph subject or a short observational sentence.

He revealed in an interview with the Atlantic that the keys to capturing action shots are remaining calm and being natural, and he encouraged other rising photograph bloggers to “act like a human. Take a quick interest. Joke with [your subjects]. Adding even the simplest quote to a photo can lend so much humanity to an image.”

Indeed, Stanton’s photographs and accompanying storylines have been garnering global interest. At the 2013 Webby Awards, presented by the Academy of Digital Arts and Sciences, HONY won several awards including “Best Use of Photography” and the People’s Voice Award for “Best Cultural Blog.” Other bloggers in other places have also been inspired to create their own spinoffs, like Humans of Lebanon, Humans of Vienna, and Humans of Singapore.

“I like that the replies and answers [of the subjects] aren’t always the warmest or happiest or reveal the most ideal lives. [HONY is] a true representation of the people in New York City whether their stories are inspirational or not,” said Hanna Yoon, a senior at Granada Hills Charter High School (GHCHS) who explained the appeal of HONY in an interview with J Student Reporters.

“Sometimes there are downs” Yoon added, “and I feel like having such a public page about the real nature of life humbles us as readers to realize that it’s okay to be where we are.”

Stanton has also used HONY’s popularity for charity efforts. Teaming with Indiegogo, a crowdfunding platform that lets users pledge money to projects or causes, he has held multiple campaigns to raise money for charity events like efforts to restore New York after Hurricane Sandy.

“There is a world inside people, and so many fail to recognize that,” GHCHS senior Marian Lee said in an interview with JSR.
She continued, “I think that is what makes HONY so powerful: it acts as a reminder that everyone is a person, rather than another being who walks past you on the street.”