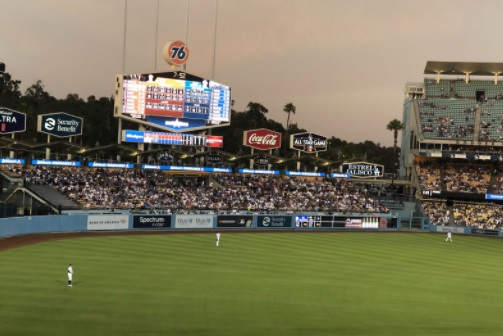 Baseball is America’s Pastime and one of the most popular sports to play and watch in the United States. The Los Angeles Dodgers is one of the most well known sports teams not just in the LA area, but in all of baseball. With the 2021 MLB season in full swing, the Dodgers are looking to repeat as champions for the second straight year, after winning the World Series during the 2020 season.

I had the opportunity to attend a Dodgers game with my church members recently.
Due to Covid-19, many fans were not allowed to attend baseball games during most of the 2020 season and during the early stages of the 2021 season. Dodger Stadium was reopened to full capacity on June 15, with Covid safety protocols in place. The Dodgers were playing against their bitter rivals, the San Francisco Giants, on the day that I attended. The game was scheduled to start at 7:10 pm, with the home team starting on defense. During my commute to the stadium, I was slowed down immensely by the amount of traffic and congestion. Due to this, I was a little late to the game and missed the first two innings.

When I was finally inside the stadium and able to find my seat, I was greeted by my other church members who I was watching the game with. I had been scrambling to try and find my entrance and get inside the stadium, so it was refreshing to finally be able to sit down in my seat and enjoy the cool breeze that was coming in. We sat behind third base and we had a pretty good view of the stadium. It was amazing to experience live sports after not being able to attend a game for almost a year.

Overall the game was very eventful and competitive. Both teams started off with a blast and scored a run a piece in the first inning. The Dodgers took a 3-1 lead after a home run from Will Smith. The Dodgers and Giants are bitter rivals and have a lot of history against each other dating back to the late 19th century. It was satisfying to see the hometown Dodgers hold onto their lead against their rivals. This all changed in the 9th inning, when the Giants scored 4 runs that put them in the lead and ultimately won them the game. This result was a bittersweet experience for me, as I was very happy and excited to see live sports in person but disappointed that the Dodgers blew their lead during the last inning to lose against their rivals.