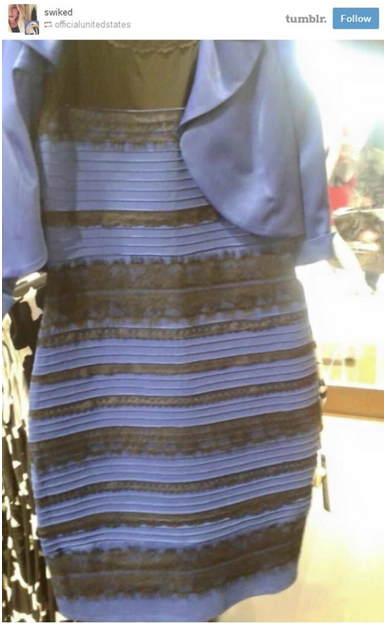 “Is the dress black and blue, or white and gold?”

This latest fad, which elicited debate all over the Internet, started when aspiring singer Caitlin McNeill posted a picture on Tumblr of the dress her friend’s mom wore for her daughter’s wedding.

McNeill didn’t know what she was instigating when she posted the picture on the February 26 and asked in a tweet what color the dress was. The viral picture sparked the interest of people all over the web, including celebrities like Taylor Swift and Kim Kardashian. Social media played a substantial role in perpetuating the cycle, which went viral amongst teenagers.

Spreading rapidly through the power of social media, the dress gained worldwide fame in the span of a few days. Yet it was only a matter of time before this craze faded into memory.

“People have better things to argue about than the color of a dress that has been circulating around on the Internet,” Duke University sophomore Nathan Lam told JSR.

Yet, the effects of one in four people worldwide using social media are clear-cut. The next “big thing” is unpredictable, but it will inevitably be spread through social media.

History has shown that fads disappear as quickly as they appear, hence their nickname “a flash in the pan.” Many types of fads exist, such as product fads, fitness fads, diet fads, Internet fads, etc. For example, a global hit after its release in the summer of 2012, “Gangnam Style” broke Youtube records and swept the nation with its memorable and hilarious music video and dance. Yet, the song’s popularity has declined significantly since its release three years ago.

“If you could dance the ‘Gangnam Style,’ you were the coolest kid on the block,” recalled North Hollywood High School (NHHS) sophomore Enrique Linan in an interview with JSR.

“I used to start dancing to it whenever I heard it back then,” he continued, “but nowadays [I don’t] out of fear of looking dumb.”

“‘Gangnam Style’ was unique [amongst fads spread by social media] though,” Linan added, “in the fact that it actually stayed popular for about three months straight before starting to die down.”

Popular fads portray how easily the human mind is captivated. It is an inherent trait in human nature to be on the constant lookout for the next “popular thing,” whether it is genuinely interesting or not.

“We now know that indeed, the photo’s lighting manipulated our brains to interpret the black and blue dress [in different ways, but [the dress] still stirred up a fun debate for a couple days and reminded us the intricacy of our brains,” NHHS senior Amanda Liu told JSR.

Yet, Liu continued, “When people cling onto and overuse these catchy fads, they become quite irksome… People should move on.”

This dress debate trend lasted around a week, with many social media users expressing outrage about the prevalence of such a trivial topic in the context of other issues happening in the world such as the continuing Ebola epidemic. Perturbed by their perceived ignorance of people who only talked of the dress, these social media users included the term “Ebola” in their Tweets to remind others of the crucial issue.

At the same time as the dress was going viral, Sierra Leone’s Vice President Samuel Sam-Sumana went into quarantine because of the deadly disease. However, this news was concealed on many websites under the dress debate.

“Fads have a special place, “ Liu concluded. “They’re fun to engage in, they add a spark to life’s monotony, and they’ve shaped our culture. But if they linger around too long, they simply become a nuisance.”