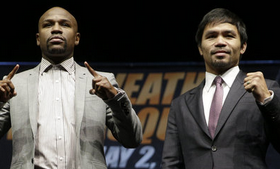 Floyd “Money” Mayweather Jr. and Emmanuel “Pac-man” Pacquaio will meet Saturday, May 2 at the MGM Grand Garden Arena in Las Vegas in a welterweight world championship unification bout that will likely the most lucrative event in boxing history.

Mayweather, 38, is the highest paid athlete in the world. He has won 47 fights, never losing single match and earning $400 million during his professional career. However, this single fight against Pacquiao could increase that total by more than 25 percent. A five-division world champion, Mayweather has claimed 28 championship belts from the best world-class boxers in five different weight classes since 1998.

Pacquiao, 36, is a Filipino legend of the sport. He is the first and only eight-division world champion, having won ten world titles and the lineal championship in four different weight classes. Estimated by Forbes to be the 14th highest-paid athlete in the world, he was named “Fighter of the Decade” for the 2000s by the Boxing Writers Association of America and is so popular in his home country that he has been elected to its House of Representatives twice.

Manlius Pebble Hill sophomore Danny Reid, who is a boxer himself, told JSR about Pacquiao.

“When my dad was in college during the 80s, Alexis Argüello got destroyed by Aaron Pryor after aiming for his fourth weight class champion title. My dad clearly remembers the commentators saying ‘I guess it’s impossible for the human body to conquer four weight classes,’” Reid said.

He continued, “[Yet] Pac-man went through eleven weight classes, conquering eight of them in two years. It’s the most impressive sports accomplishment in the history of mankind.”

“Don’t even get me started on Mayweather,” he told JSR. “Remember Ricky Hatton, [the formerly-undefeated British boxing legend who was dealt his first loss by Mayweather in 2007]? …There’s a reason why he got paid $100 million dollars for fighting someone for 70 minutes. His shoulder-roll, which is his main defense technique, is flawless. Nothing gets through, not even Pac-man’s bullet punches.”

In an interview with JSR, Fayetteville-Manlius high school junior Bryant Silva, who won the New York Section III Class D high-school junior lightweight boxing competition in 2014, argued to JSR that “Pac-man will win this one.”

Silva explained, “Mayweather’s shoulder-roll is god-like. However, he depends on it too much. Without the shoulder-roll, Mayweather isn’t the legend he is.”

Silva further argued that “Pac-man’s punches are spears. They pierce through everything with unreal accuracy. Many of the boxers he’s already beaten were all big time defenders. Look what happened. Pac-man saw the space between the guards, and nailed the most precise hooks I’ve ever seen in my life.”

Although the two boxers have no one else to fight except each other, boxing fans like Reid and Silva have been waiting for them to meet for more than seven years. After years of wrangling over the terms, the two boxers agreed to a contract that included random drug testing. The purse is already at $200 million; those who want to watch the fight in person will have to pay more than $28,000. The fight is a milestone for both boxers, and both have announced plans to retire after the grand match.

Just like any sport, the opinions and predictions vary greatly. With a month and a half left until the fight, both boxers are preparing for the match of their lives. The scale of the match is getting bigger, the hype is going through the roof, and more money is being poured into the purse. Until May 2, every word, every rumor, and every nuance will be analyzed with anticipatory fervor.