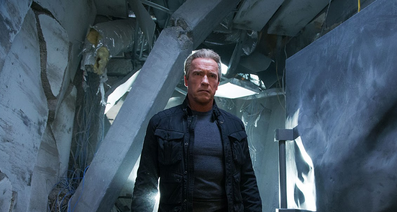 “Terminator: Genisys,” the fifth installment in the Terminator franchise and a “reboot” with changes from the originals, makes for a decent action flick while paying tribute to what came before it. It is not a perfect film, but it is more entertaining and enjoyable than I thought it would be.

The movie starts off with the now-familiar backstory of the first movie of the franchise: a soldier named Kyle Reese is sent back to 1984 to protect Sarah Connor from the artificial intelligent network called Skynet. Connor is the mother of John Connor, the future leader of the human resistance movement against Skynet.

Here is where the changes happen. Reese, upon arriving in 1984, gets attacked by a Skynet machine and is saved by Sarah Connor, no longer the weak waitress of the first movie but instead a strong and trained fighter. Along with her and “Pops,” the Terminator that saved Sarah’s life from another Terminator when she was a little child, Kyle must jump in time once again to 2017 to face against Skynet and an unexpected enemy before history repeats itself.

Unlike “Salvation,” the last Terminator movie to hit the screen, “Genisys” is entertaining. Genisys has some impressive fights scenes and enough tension that the audience are most likely paying attention. The alternative timeline scenario that this movie presents also helps grab attention, as audiences will most likely be trying to spot any homages to the franchise and any major differences.

Emilia Clarke and Jason Clarke do decent and respectable jobs of portraying Sarah and John Connor, respectively. The real star, however, is the Terminator T-800 – known as “Pops” – played by Arnold Schwarzenegger. Schwarzenegger manages to make the Terminator into both an effective comedic sidekick and a surprisingly sympathetic character, effectively conveying familial feelings behind the supposedly stoic face of a Terminator. This emotional build pays off in the end.

Unfortunately, Jai Courtney’s Kyle Reese falls a bit flat. Courtney is unable to fully convey the cynicism and weariness that Reese, a longtime veteran of the war against Skynet, should have, and sometimes makes weak jokes in times of danger, making him look a bit detached.

Overall, the film also goes just a little too far with the changes it’s making in the attempt to reboot the franchise. One thing in particular that is jarring is how quickly the focus of the movie, and indeed the franchise, changes. The franchise’s backstory of a Terminator being sent back to deal with the Connors and the human resistance sending back one of its own to protect them is by now well-entrenched in audiences’ minds. Quickly, the film abandons this premise in a twist that is quite jarring.

Terminator Genisys means well with its changes to the now-well trod story, but it goes just a little too far with said changes and it lacks somewhat in execution. Nonetheless, its action scenes are enjoyable to watch, and is bound to keep audiences glued to their seats until the end.