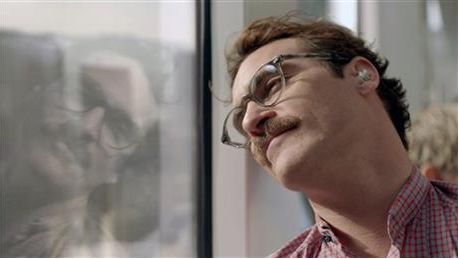 The film “Her,” written and directed by Spike Jonze, has earned critical acclaim not only for its smart and poignant romance story, but also for its portrayal of a near-future dominated by benevolent operating system (OS) helpers. In this, the plot questions the current dependence of humans on machines, as well as the idea of humanity persevering through a technology-dominated age to eventually find love and romance.

“As far as sci-fi cinema is concerned, there’s nothing unusual about falling in love with a computer or conjuring your perfect partner from a keyboard,” says Mark Kermode in a review for the Guardian.

Samantha, the artificially-intelligent OS and love interest in the film, has much more in terms of human qualities and independent thought than any intelligence system available today, yet the idea of a relationship between humans and machines is not new. Pop culture has multiple depictions of humans falling in love with inanimate objects dating back at least to the Ancient Greek myth of Pygmalion, in which a sculptor falls for his statue of a beautiful woman.

More recent examples like “S1m0ne,” a film where the world embraces a virtual woman as a movie star, and the television show The Big Bang Theory, in which a character is temporarily infatuated with Apple’s OS Siri, have shown that the idea of love transcending physical barriers for pure consciousness is slowly seeping into the modern world.

The real world may currently scoff at the thought of man falling in love with a machine, believing that the idea belongs to science fiction and broad depictions of the future. However, it’s not far from our current reality of online dating, where users interact through the Web before transitioning their relationship to the physical world. Until then, the relationship is virtual — conducted through texts and pokes that remain pixels on plasma screens.

There is an underlying societal fear of how the future will be affected by the growing advancement and assimilation of technology. In many contemporary films, the idea of emotional vulnerability becomes threatening when technology becomes intellectually superior to humans.

Popular franchises like “the Matrix” and “the Terminator” portray dystopias ruled by machines with a similar human intelligence shown by Samantha in “Her.” Yet in the future of “Her,” love and human emotion cast a rosy glow that leads to OSes living, falling in love, and realizing their own potential for expansion. Instead of forming an alliance to destroy humanity, they pursue the idea of their consciousness.

The idea of relationships forming between people and machines isn’t that far-fetched. In fact, the idea of humanity sparking more love and emotional response in our mechanical creations may be more realistic than ever before.

As stated by Bill Gates in a speech for University of Illinois Urbana-Champaign, “Personal computers have become the most empowering tool we’ve ever created. They’re tools of communication, they’re tools of creativity, and they can be shaped by their use.”