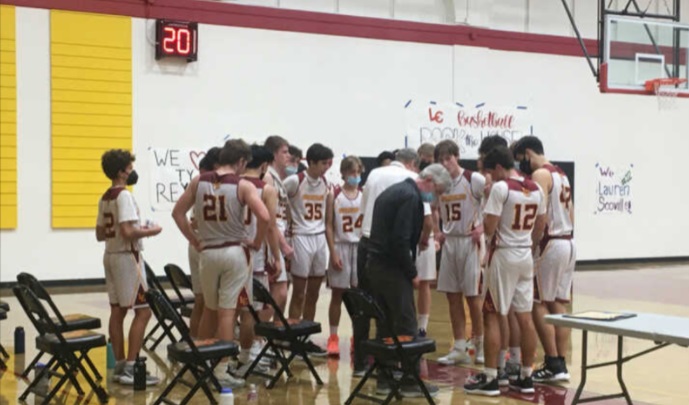 2020 was different. School was different. Sports were different. Athletes at La Canada High School began to practice in October due to COVID-19. However, as cases began to spike during the winter season, the campus had to close down, resulting in a pause to all sports. In late February, when cases decreased, the school reopened its campus for a few sports, such as track and field, and held a sports event for the first time in eleven months.

Mid-March, approximately one year after the lockdown, was when student athletes officially went back to school to practice and compete against other schools. Fall sports, winter sports, and spring sports were on campus at various times of the week.

Students were required to wear masks while practicing, and kept social distancing measures. Swim and dive, a year-long sport at La Canada, was the only sport that could not require masks due to the water, and instead took other precautionary methods. The team split into two cohorts, Group A and Group B, in order to reduce the large team that consisted of both girls and boys. Group A consisted of more experienced swimmers, while Group B was formed of mainly freshmen. The two groups practiced at different times during the day, from Mondays to Fridays. Furthermore, practice times rotated every two weeks for the two groups. During the practices, swimmers tried to keep a distance of six feet apart from people in the same lane.

Unlike other sports, swim and dive had a few virtual meets, which was the biggest change of the season because they had to do the events in their own pool and then compare the times with their opponents. Swimmers had their first virtual meet against Blair High School on April 15th and won despite having a shorter practice season compared to last year. “The jitters before lining up on the blocks are still here and the adrenaline rush of racing side by side with someone you want to beat so badly is a feeling that I’ve missed,” said Timothy Joo, a junior and varsity swimmer at La Canada High School.

Like swim and dive, other sports such as boys’ varsity volleyball and girls’ lacrosse had regular practices every day of the week. For boys’ volleyball, the team played five games a week instead of two to maximize their playing time. The consistent practices helped them defeat Monrovia High School on April 20th with a score of 3-0.

For girls’ lacrosse, they had practices on the weekdays and games mostly on the weekends. They were one of the few sports who were able to resume practices in February. During the school year, when they were not practicing all together, the team members kept in touch and practiced individually to keep up their stamina and skills.

Another junior at La Canada High School shared what it was like to return to school for sports. “I was extremely thrilled to hear that we could go back and practice at the school and have our games. I love my teammates and everyone‘s competitiveness when we are around each other,” said Margery ‘Claire’ Steward, a lacrosse player.

Although things are different, it is great to see sports return at La Canada High. With continued safety measure, it is excited to see how sports will progress in high schools in the coming year.