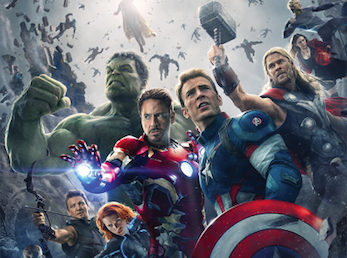 “Avengers: Age of Ultron” has smashed through theaters worldwide, opening in the US on May 1 and generating $187 million on its opening weekend alone. In the span of four weeks, the hit film produced over $1 billion, falling just short as the year’s highest grossing film behind “Furious 7.”

While these are all impressive numbers, status as an Avengers film predestined “Age of Ultron” for such success. Both DC and Marvel alike had made such huge profits from their previous films that they already have their own production lines until 2019 with a total of 25 expected film releases. The comic book universe has been expanding at an exponential rate with the release of each movie.

This shows two truths that are becoming more and more clear: the comic book movie industry has risen as a permanent genre in media, and certain franchises have become dominant in this movie age.

“It already seems like the comic book movies have a permanent role,” said Jiho Kim, an avid fan of superhero movies. “They’re not that difficult to adapt onto the big screen and they have low risk because they’ll have guaranteed support from comic fans. As long as the films are fun to watch I personally don’t have any qualms.”

Although some are worried about the idea of quantity over quality, Marvel has been planning an intricate plot over the past years that started from its first Thor movie. The series of powerful objects that have appeared in the Thor movies, the Avengers movies, and “Guardians of the Galaxy” have been slowly but surely setting the plot for the next Avengers movie, “Infinity War,” which has been split into two parts. Marvel TV series “Agents of Shield” and “Agent Carter” have also connected to the vast cinematic universe to create indirect movie and comic book references for the fans.

“The current method of having multiple plot lines and having them interweaving in the movies, the post credit scenes, and the TV drama series is innovative,” said Kevin Kwon, a comic book enthusiast. “But I would really like to see how it all culminates in the ‘Infinity War’ movies. All the gems are in different hands now. So while they have a lot to go, if [Marvel] pulls it off correctly, the movie would be fine.”

DC, historically Marvel’s biggest competitor, has maintained separate television and film “universes” for its franchises. Although some fans are pleased with the plots connections in “The Arrow” and “The Flash,” others have complained that having separate TV and cinematic universes may be impractical.

Andre Lee, a comic book enthusiast who has been to several comic conventions, doesn’t harbor that complaint.

“It’s ultimately their own decision and I don’t have a preference [between the two] because each of them are good in their own ways,” he told JSR.

“In ’Agents of Shield,’ it’s good to see how the Avengers are sometimes mentioned and how movie events impact TV shows,” Lee said. However, he continued, “DC makes very good stand alone TV shows that don’t need the movie universe to connect. They are each good in their own rights… [Superhero shows are adding a] mix of other genres such as crimes, drama, and more. In addition, each movie and TV show is so well made that each and every one of them is unique compared to the others. Media expansion has been a very good choice for both of these companies.”

These vast universes are part of the film industry’s transition into a new phase. Today, fan enthusiasm is focused less on movie stars and more on movie franchises. The success of comic book films is ending the age of Hollywood that was focused on singular stars.

Take Will Smith, for example, who used to guarantee hit films by just appearing in them. After a recent string of movies that failed to live up to the hype of his old ones, Smith has decided to join DC’s Suicide Squad movie about a group of villains serving the government as anti-heroes. He won’t be the main character, but one of many in the upcoming film.

As a personal fan of Will Smith, it pains me to admit that his era is gone. However, we should embrace the beginning of a new golden age that focuses on movie sagas that expand beyond one film. It is now the age of superheroes.