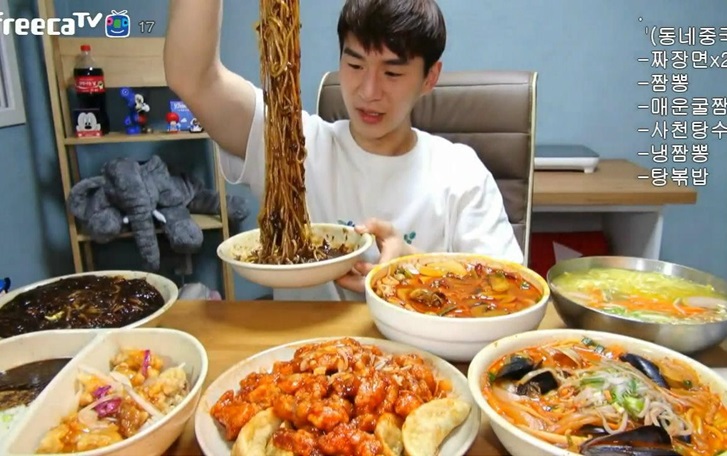 Mukbangs which feature people usually eating large amounts of food while talking and recording themselves have gained popularity over the last few years in Korea. The word mukbang comes from the word “muk-ja” in Korean which stands for “let’s eat” and “bang-song” which means “broadcast.” The trend first started in Korea and has been getting more popular across America and other parts of the world.

Mukbangs are popular because for some people who gain a lot of popularity through mukbangs, can earn hundreds of thousands of dollars per year on Youtube or other streaming services. Many do mukbangs for a living and can get millions of subscribers on Youtube. In Korean culture, dining is a social activity and mukbangs allow people to enjoy their food while watching the host. It is comforting for people to watch someone prepare and eat a meal with them through the screen.

Mukbangs are also popular because older people who may not be able to get out of the house much can also watch mukbangs and not be lonely during their meals. The Youtuber can interact with the audience during a live stream for example and create better connections with the viewers. Many people eat alone and by watching mukbangs, they can feel less lonely and not eat by themselves.

Another reason why people also enjoy watching mukbangs is because of the ASMR (Autonomous Sensory Meridian Response) effect. By using ASMR Youtubers eat the food in a way that makes it taste better and more appealing to the viewers. ASMR can be seen in videos when the Youtuber slurps noodles, grills sizzling meat, or chews crunchy food. It is more attractive to people to hear the noises from eating the food than simply eating for others to watch.

Some people also enjoy watching these videos because they simply like watching others eat. It can be satisfying or pleasing to watch someone eat foods you may not be able to eat on a daily basis while staying healthy.

Mukbangs have been one of the biggest trends in the last few years and is now a worldwide craze. People that make mukbangs do it because it provides money while doing a job that does not require much work. Many enjoy watching mukbangs across the world because it brings enjoyment and will most likely continue to stay popular for the next few years. People should expect more mukbang-youtubers to start appearing across the world on Youtube in the future.