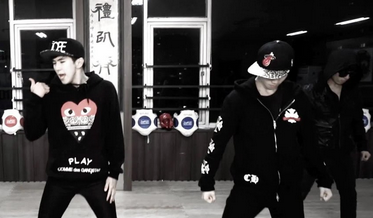 With Korean pop (K-pop) music becoming an international sensation, it is no surprise that the fancily choreographed dances of K-pop groups inspire cover videos from fans the world over. While it can be hard to differentiate one video from another, those of the K-Tigers will be sure to leave an impression.

A Taekwondo demonstration team, the K-Tigers film videos with high-flying kicks, spins, intricate punches, and dance moves to the beat of the latest K-pop hit.

“I was really impressed when I saw their videos. I thought it was really unique of them to blend Taekwondo and K-pop dance, two things Korea is known for,” said K-Tigers fan and Beckman High School (BHS) junior John Park.

The group first gained recognition when one of K-pop’s biggest artists, BIGBANG’s G-Dragon, retweeted the K-Tiger’s Taekwondo dance cover of bandmate Taeyang’s hit “Ringa Linga” with the caption, “Taekwondo TURN UP!!” At the time of this writing, the Ringa Linga video had accumulated more than five million views and remains their most popular video.

Korean artists other than BIGBANG have also acknowledged the skill of the K-Tigers, including SISTAR’s Soyou and Miss A’s Min and Jia, with whom the K-Tigers announced a web-drama collaboration on March 3, 2015. Even fellow martial artists appreciate what the K-Tigers are doing to modernize and popularize the traditional Korean fighting style.

BHS student and five time national champion William Lee told JSR, “the K-Tigers are a perfect example of a combination of the old and modern Taekwondo.”

“Although their demonstrations consist of many flashy modern techniques, they remind us the beauty and morals of taekwondo,” said the third Dan black belt.

The fusion of traditional and mainstream Korean culture presents an unprecedented opportunity for the K-Tiger’s unique meld of dance choreography and Taekwondo to be exported worldwide much like K-pop has been.

“I really do believe this mixture has the potential to promote Korean culture and generate interest in it as it targets an audience the two activities can not appeal to individually,” said Park.