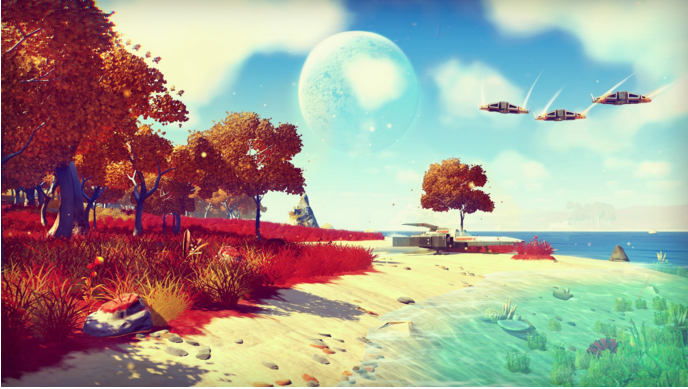 “No Man’s Sky,” an adventure video game set to be released next summer for Playstation 4 and Microsoft Windows, is the cool new thing in gaming. Based on the launch trailers, released gameplays, and published articles, this game seems awe-inspiring.

In “No Man’s Sky,” players explore a virtually-infinite universe, naming, collecting, and studying the terrain, organisms, and star systems therein. The developers from Hello Games,a team of merely ten programmers, designed software to algorithmically generate an in-game universe of ungraspable size with 18.4 quintillion unique planets. This universe is magnificently big, and navigating through it is much like navigating through the World Wide Web.

Another exciting feature about this forthcoming game is that it will be a shared experience. All players will play in this one universe, and will have – although it may be rare because of the sheer size of the universe – the chance to run into each other. Organisms, planets, and star systems named by one player will be displayed for every adventurer, adding to the social aspect of the game and making the game extra exciting for game enthusiasts and fans.

Gregory Bachtold, a student at Santa Margarita Catholic High School (SMCHS), told JSR that he believes that this game will be “phenomenal” and will “cause a great hype in the gaming community.”

Reportedly, all of the hype for the game is making Sean Murray, the co-founder of developing studio Hello Games, nervous. Quoted in Eurogamer, he said that the game is facing lots of high expectations and labeled this great excitement from the public “will ultimately end in hurt.”

Some people are skeptical that “No Man’s Sky” will be a success, at least as an entertaining game.

“I don’t think this game will be fun,” SMCHS student James Yim told JSR, “but because this game is very creative and original, people will play the game regardless.”