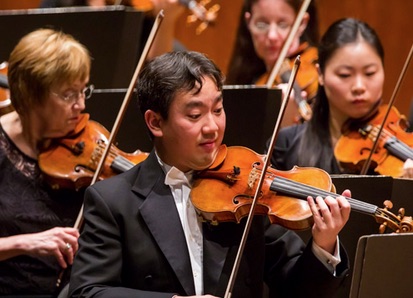 After 34 seasons of Glenn Dicterow’s leadership, the Philharmonic has spent the 2014-15 season searching for his successor. The hiring of Huang, an accomplished musician with charisma, joins a list of sweeping changes to the Philharmonic following the announcement of conductor Alan Gilbert’s resignation in 2017 and the appointment of Joshua Gersen as assistant conductor.

In an official statement, Alan Gilbert, the music director of the Phil, stated, “The concertmaster shapes the persona of an orchestra, and in Frank Huang we have found just the right mix of virtuosity, flair, musicality, and collegiality.”

The 36-year-old violinist, who has built an impressive career since he began playing at the age of seven, is an inspiration for many younger musicians.

Omar El-Abidin, a sophomore percussionist in the Juilliard Pre-College Program, told JSR, “Huang, who has made it to such a high level of playing…, serves as a pinnacle of hard work and virtue.”

He continued, “I can assume with complete confidence that his work ethic and passion for classical music have gotten him to the top. To me, that notion deserves endless applause.”

The Chinese-born musician also represents a new generation of minorities on the stage.

“For someone with a similar Asian background to take on such a prominent role is truly inspiring to me,” said Amy Liang, a Chinese American cellist from Westfield, New Jersey. “It is extremely difficult to become as successful as someone like Huang is in regards to music, and I think it definitely encourages me to work even harder and appreciate music as not only a hobby, but also as significant part of who we are.”

Huang assured the public that the other changes to the Philharmonic will not affect his enthusiasm and commitment to the Phil when he takes the position of concertmaster.

“Whoever is the director will make a big impact,” Huang told the New York Times. “But a great orchestra will sound great no matter who’s conducting. With such talented musicians, you’re going to get committed and convincing playing regardless of the interpretation.”

El-Abidin told JSR, “The NY Phil is a constantly evolving orchestra and must move on to its new era. Will its next era be equivalent to the massive shadow of the days when Leonard Bernstein, Pierre Boulez, and Lorin Maazel stood on the podium? Perhaps… [But] whoever takes the podium, young or old, has a massive opportunity ahead of them to galvanize the world of classical music.”

As the Philharmonic has begun the search for a conductor to succeed Gilbert, fans have three new faces to look forward to in the coming seasons. Each will bring a fresh new voice and character to the renowned orchestra.