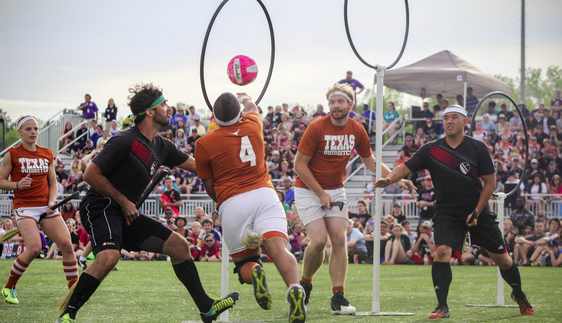 Quidditch, the fictional sport from the “Harry Potter” series, came alive at the Quidditch World Cup at Manchester Meadows in Rock Hill, South Carolina on April 11 and 12.

First founded by Middlebury College students Xander Manshel and Alex Benepe, real-life quidditch started in October of 2005. As curious 20-year-old college freshmen, Manshel and Benepe started out with towel capes around their necks and hula hoops on desk chairs as their goals.

Quidditch consists of a unique mix of elements from rugby, basketball, and dodgeball. A quidditch team is made up of seven athletes who, despite not being able to fly, play with brooms between their legs at all times, and the goal of the game is to catch the “snitch.” While the snitch from the Harry Potter franchise is a golden ball with wings, the real life adaptation is an athletic person dressed in all yellow who has a tail attached to her shorts.

The World Cup this year had 80 teams from the United States, Canada, and Mexico, which competed until only two remained: Lone Star QC and the University of Texas, which won the final match and emerged as champions.

Stewart Driflot, of the Boise State team, described the sport as “a rollercoaster of emotions, dealing with lots of injuries.”

He continued, “It’s a lot of challenge, but now I’m going around the US competing, and it’s a dream I would have never imagined.”

Sofia de la Vega, a North Hollywood High School (NHHS) senior and a founder of a high school quidditch team in Los Angeles, attended the World Cup and told JSR, “There were not only matches you could enjoy; besides the matches, there were tons of Harry Potter and quidditch merchandise booths. …Other activities offered were definitely more Harry Potter based in order to bring families out: a costume contest, a Harry and The Potters concert, and more.”

“It seems weird for others that these people are running around with broom in between their legs, but as they watch the game more, they can see that it’s an intense sport; quidditch contains actual physicality and athleticism,” said de la Vega.

“Quidditch has been inspired by the sport from Harry Potter,” she continued, “but is not necessarily trying to mimic it. This way, the sport attracts non-Harry Potter fans to play this game. They see this challenge of such a unique sport.”

De la Vega also explained another merit of quidditch, saying, “Not only is it considered a sport, but it is also a gender-integrated sport, meaning there is gender equality on the pitch and within the community, and [that the sport] accepts that there are more than just the binary genders of male and female.”

In recent years, the quidditch community has started introducing children to the sport. Teams have reached out to kids through summer camps, quidditch workshops, and after-school programs. Other teams have been invited to birthday parties to teach quidditch. Organizations such as the Boy Scouts and the Girl Scouts have paired up with teams to introduce the youth to quidditch.