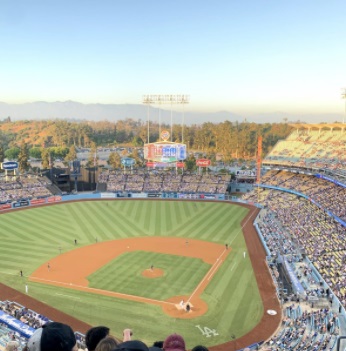 The roar of crowds cheers on players as they bat, dribble, shoot, run, slide, hit, and steal. The intensity of sports events normally draws thousands, if not tens of thousands, of attendees during normal sports seasons. March Madness, the Super Bowl, the World Series, and the NBA Finals are just a few of the examples of the widespread popularity of sporting events that draw large crowds. As a result of the global pandemic, however, sports venues see none of this excitement amongst fans, as many of these locations are closed across the world. This has been devastating from a financial standpoint, as such venues require money to continue operating. Not only are sports venue executives impacted, but sports fans across the nations are restless, anxiously waiting until the day they are able to spectate games in person. Luckily, these sites are poised to reopen soon in California, as many states begin to reopen. However, this leads to the very important question: what would reopening sports venues look like?

Obvious measures needed are mask mandates and social distancing. Anything less would be irresponsible. However, other factors need to be considered as well. For example, many venues sell food to attendees, and venues might not be willing to close food booths, and will likely allow attendees to temporarily take off their masks to eat. When thousands of people are gathered in one location, even this simple act poses a considerable risk. Obviously, venues will be forced to limit the number of attendees, but the risk is still a factor to consider when reopening stadiums.

Furthermore, like with many other in-person gatherings impacted by the pandemic, sporting events could potentially be a super spreader that may have a noticeable impact on the community. With numerous people in one location, even one infected person can significantly spread COVID-19. Temperature checks and signed statements denying COVID symptoms could be implemented, but they are not effective as this virus has shown to spread even in asymptomatic people. Contact tracing seems to be the most effective solution here, although admittedly, extensive contact can lead to low levels of attendee cooperation and a feeling of privacy intrusion. One possible solution is contacting those who sat near an infected person (within a radius of several meters, such as in a specific sector of a venue), encouraging them to be tested. This way, attendees don’t have to provide extensive lists of people they have interacted with to public health officials, while also minimizing the effect that such a superspreader event could have on locals.

With stadiums on the list of places that are reopening soon, it is important that we all exercise a bit of caution before excitedly going down to places such as Dodgers Stadium or Staples Center. However, in-person sporting events inarguably provide a different experience that cannot compare to watching the event through television, something that will make many sports aficionados desperate to go back to attending live sporting games once and for all.