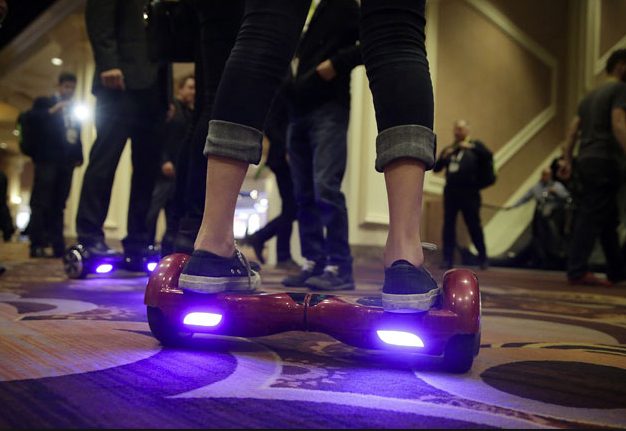 Self-balancing, two-wheeled electric skateboards are gaining popularity. Many have been buying these items, used by celebrities such as Justin Bieber and Cara Delevingne, at places such as Amazon and Walmart.

Although there are many different brands that sell these skateboards, one of the most visible brands is IO Hawk. Their self-balancing skateboards are about $1800, go up to 6.2 miles per hour, and need to be charged after use.

There are, however, other more affordable choices available for purchase on Amazon and Ebay. On Amazon, Packgout seems to be a popular brand. It is listed for $324, and 82% of the reviewers on the site gave it a “4” or a “5.” According to David Pierce, featured, who wrote about the scooters in a June article for Wired, “The designs may vary slightly… But make no mistake: They’re all the same.”

Using one of these skateboards is simple. To go forwards or backwards, riders simply lean in the direction they want to go. To turn, they put more pressure to one side.

There has been dispute over what to call these devices. While many use the term “hoverboard,” this is not an accurate term for them because they have wheels and do not float in the air. While people have come up with other names, such as “hands-free Segway” and “motorized wheelcraft,” no one has settled on a definite term that describes this item.

Many celebrities have been seen riding them. JR Smith of the Cleveland Cavaliers rode one during the NBA Finals, before and after the games. Music producer and DJ Skillrex is also known for riding these self-balancing skateboards when he performs. Wiz Khalifa also garnered attention for using an electric skateboard after being stopped, knocked to the ground, and handcuffed by police at Los Angeles International Airport (LAX) while riding one of the devices. Khalifa publically accused police of racism, and a week later returned to LAX with a golden IO Hawk and experienced no trouble from the police. Publicity of the event led to more interested in the product.

Local students have differing opinions of the boards.

“I think they’re pretty cool. They help you transport from place to place and I’ve seen a lot of people out on the street and at the pier use them. They light up and seem pretty easy to use,” Ryan Doyloo, a junior at Harvard-Westlake commented.

However, Hunter de Rubertis, another junior, told JSR, “I think these [self-balancing skateboards] are pointless and unnecessary to buy especially because of its price. I think people like them because it makes them look cool [to have the boards], but honestly I think they are overrated.”