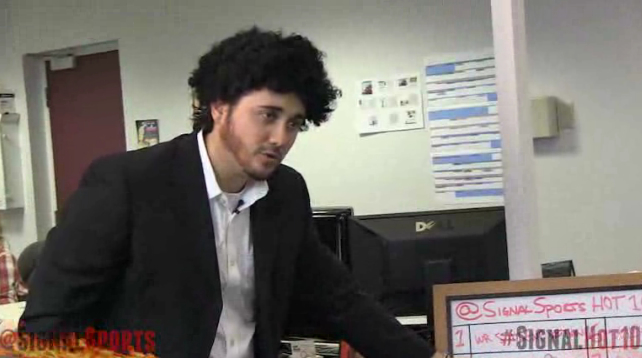 This is one of many tweets, sent to the Twitter account @SignalSports, that have sparked the local “Twittersphere” over the past season of high school sports in the City of Santa Clarita, which includes the communities of Valencia, Saugus, Canyon Country, and Newhall. These tweets are creating noise, tension, and competition between athletes and fans all over Santa Clarita, and the Signal Sports staff is loving every minute of it.

In a weekly Wednesday YouTube web video called the “@SignalSports Hot 10,” Vince Johnson, Cary Osborne, and Dan Agnew create and discuss a top 10 list of the major stories in the Santa Clarita sports scene that have created the biggest impact on the valley from a social media perspective.

Santa Clarita Signal Chief Multimedia Officer Vince Johnson and Sports Editor Cary Osborne created the show to build hype in Santa Clarita leading up to more dramatic showdowns between high school athletic teams. It has provided incentive for virtual student sections to cheer on their teams as loudly as they can.

“This list isn’t about who’s the best or who’s not. It’s about who’s generating buzz,” said Johnson to Osborne in the Oct. 3 “Helmets, Vetoes, and Angry Tweets” episode.

Starting from the show’s premiere on Aug. 28, 2013, student sections from all over the valley have begun to take notice and initiative to gain the upper hand in bragging rights for their teams. They post on Twitter and Instagram to voice their strong opinions and advocate for the attendance of every sports game.

This cumulative top 10 is not limited to current high school sports. Fired-up student sections also use Twitter to argue over superiority of schools and the quality of local graduates who are now playing professionally, like Kansas City Royals ace James Shields; New England Patriots running back Shane Vereen; and professional golfer Max Homa, all Valencia graduates, and Delano Howell, a strong safety with the Indianapolis Colts who attended Hart. These players were also regulars on the list last season.

The setting of the “Hot 10,” which resembles the debate atmosphere of ESPN2’s “First Take,” is familiar to viewers of the ESPN2 show. In Sports Illustrated, Richard Deitsch has described it as “a show designed around 62-year-old Skip Bayless debating and defending sports opinions…, attacking famous athletes…, and generally acting like a hockey goon without the charm of one.”

The members of the Signal’s show are even developing personas similar to those of “First Take” members Skip Bayless, Stephen A. Smith, and Cari Champion.

“Ever since Vince started obsessing over Brady White, we make fun of him and kind of oppose everything he said,” Agnew told this reporter in conversation. “He’s become the antagonist of the show: the Skip Bayless kind of guy.”

Cary Osborne seems to have taken over Stephen A. Smith’s role, arguing against whatever Johnson says, while Agnew is the objective arbitrator that Cari Champion portrays on “First Take.”

With entertaining banter and controversial rankings, Johnson, Osborne, and Agnew in the “@SignalSports Hot 10” are stirring up Santa Clarita sports in an unprecedented way.