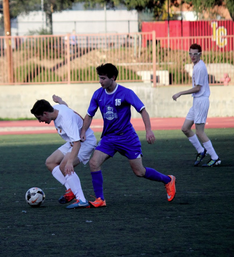 Rio Hondo League games have started for the La Cañada High School Varsity Soccer team, and here is a recap of their season so far.

The Spartans started their season on December 5, 2014 by playing against the El Camino Real Conquistadors, a team which is ranked second in all of California. After the 80 minute game, the Spartans lost by one goal scored by Chris Attanasio, a senior at El Camino Real.

While this was a disappointing start to the season, Lawrence Ku, a junior on the team, remained optimistic by saying, “Everyone is 10 times more disciplined, determined, and ready to play than last year’s team. We’ve been playing literally some of the best teams in the state so that’s why our record isn’t convincing.”

On December 26, the Spartans faced off with the Flintridge Prep Rebels and won with an overwhelming score of 5-1. After that, on December 30, 2014, the Spartans crushed the Maranatha Minutemen 8-0.

However the second game and third games did not go as smoothly as the first, as the Spartans lost to the South Pasadena Tigers with a score of 2-1 and then tied Monrovia 0-0. However, on January 23 the team bounced back by beating Blair 7-2.

While the Spartans have a league score of 2-1-1 so far, they have hope for the future as they recall their performance in the pre-league games.

Michael Selsor, a junior captain of the Varsity squad said, “We’ve done well, but we are ready to show who we really are [by winning Rio Hondo League].”

The team’s next game is Wednesday, January 28 against Temple City.